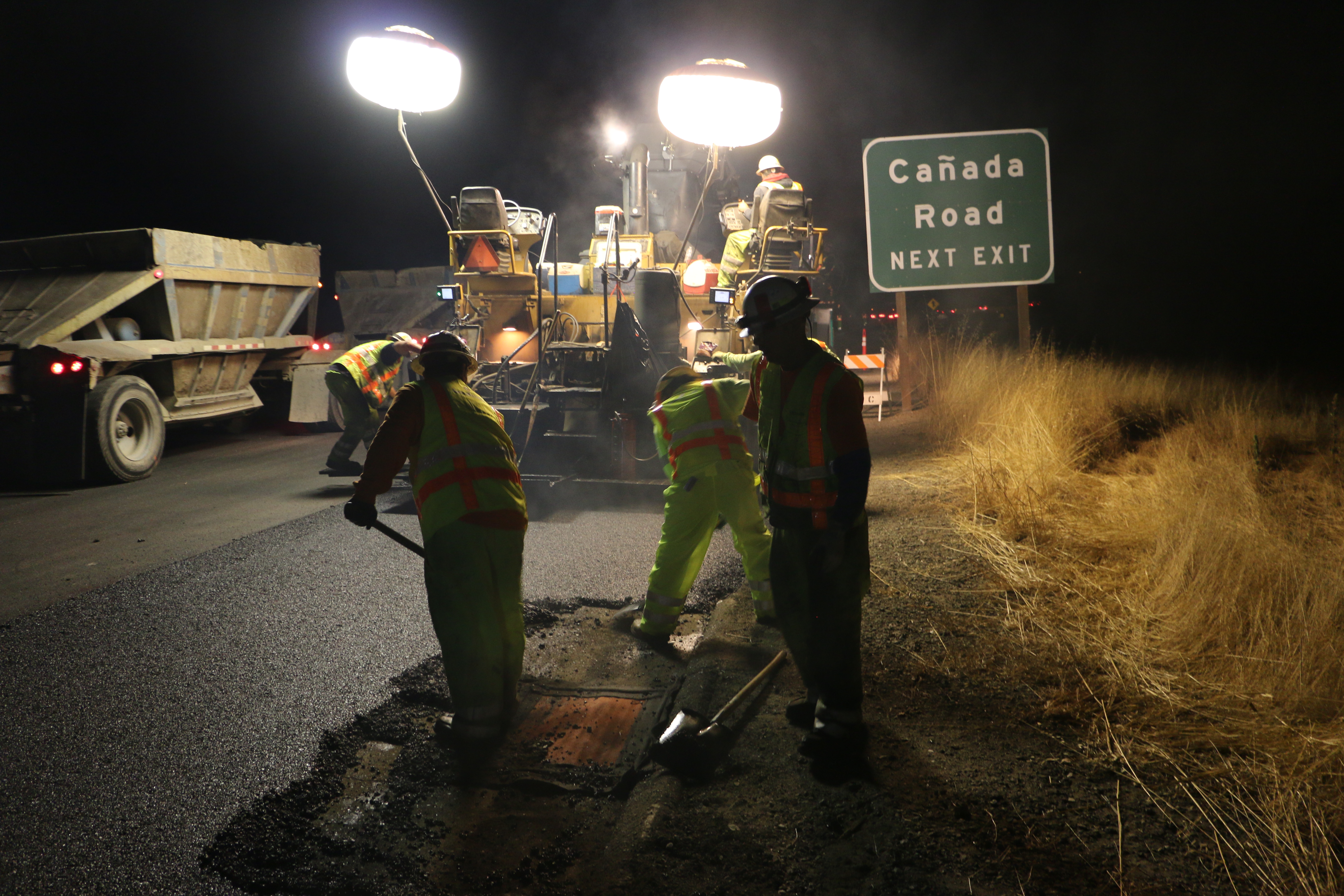 WOODSIDE – Coming down to the wire, Graniterock’s Construction Division just wrapped up one of its larger paving projects in recent years.

The $15 million Caltrans job, with 85,000 tons of rubberized asphalt on a seven-mile stretch of Interstate 280 between Woodside Drive and Highway 92, could not have been successful without the concerted One Company effort that went on up to the very end.

The project bid by Estimator Paul Brizzolara included all the elements that make such work challenging – large asphalt quantities placed in a short amount of time, at night on a busy freeway.

Not to mention the team faced potential liquidated damages of $8,300 a day if not finished on time.

“The No. 1 challenge is we had an aggressive schedule that maximized the output of the asphalt plant,” Project Manager Mario DaRosa said. “It took serious One Company planning to meet this schedule.”

The Company’s Construction team collaborated with the Materials Division early on to ensure we could win the job and meet Caltrans’ tight time frame for completion.

“This was the perfect project to demonstrate Graniterock’s leadership in construction and construction materials in the Bay Area market,” Stuart said. “We proved once again that our teams can hit the target when planning and communicating well together.”

A key component to the project's success was the time Mario and Project Engineer Kyle Bencala spent with Paving Superintendent Brent Edelman and Paving Engineer Sal Duran, who dissected the project before work began to create a paving plan that would meet the deadline and make best use of the Company’s paving crews.

The paving plan was a living document that was constantly managed by Mario and Kyle as the paving crews worked through the project.

“There was a constant exchange of ideas throughout this project from across Graniterock to help us meet the ultimate goal of getting the work done in the number of days allotted,” Mario said. “Not one person had all the answers.”

The Materials Division rented a rubber plant to produce rubberized asphalt at the Redwood City branch.

Rubberized asphalt contains recycled tire pieces, which add to the material’s strength and results in a quieter road.

Extra precaution was taken to protect the crews as they worked late at night and into the early morning next to heavy live traffic.

With four lanes of traffic in each direction, the project management team was able to create a buffer lane between live traffic and the crews.

“We’d close two lanes at a time and work in one while the other was a buffer,” Mario said. “That helped us feel a little safer.”

In addition to the paving, the project involved 6,000 tons of dig outs, 4,000 loads of grindings and some concrete panel replacements.

Thanks to all of the Rock Stars who worked hard to make this a big win for Graniterock.