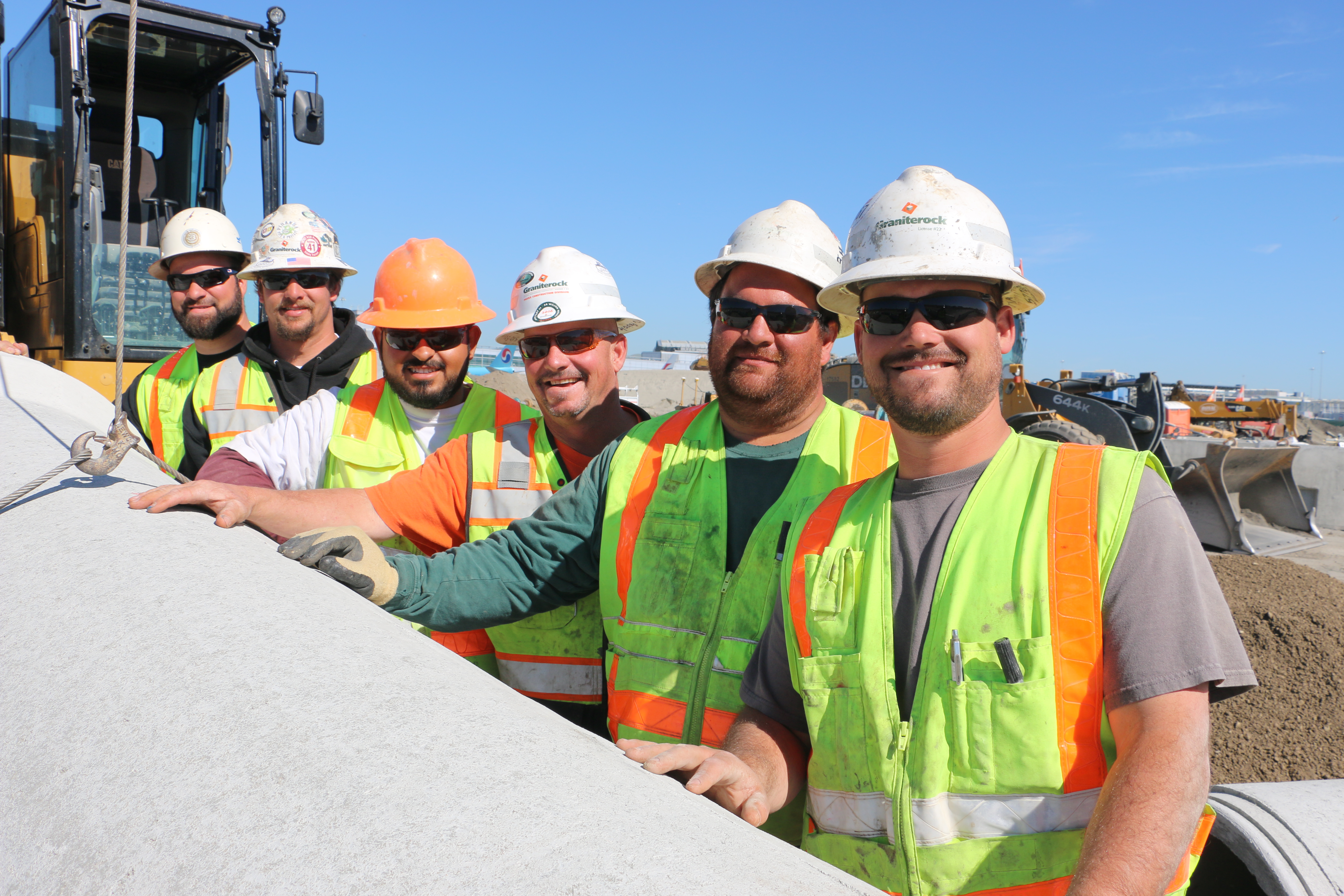 SAN FRANCISCO – One of the most important things a foreman can do is take young guys under his wing and put them on a path to success.No Graniterock foreman has worked harder on this front than Darien Shirk.

Darien himself is an old-school, savvy underground foreman known to figure out solutions for the most difficult jobs.

What makes him a true leader is Darien’s ability to see the potential in a guy just starting out and help that guy make the most of his career.

“I’m very happy with what I’ve accomplished so far,” said Chris Perez, 31, a Graniterock underground foreman who joined one of Darien’s crews as a laborer at another company after graduating from high school in 2005.

Chris excelled under Darien’s guidance and was promoted to foreman in 2014.

“I owe all of it to him,” Chris said. “Darien’s taught me everything.”

Darien jumped into the construction industry right after high school.

He worked at several other contractors before moving to Graniterock’s Construction Division five years ago.

Through the decades, he’s developed a passion for underground work and leading teams with a coach-like style.

He’s serious about safety and hard work. You won’t find him sitting on the sidelines while his teammates do the digging and installation.

Darien’s right there with a shovel, in the trench or operating a piece of equipment, all of which generates respect by his team and turns out successful projects.

Working with storm drains, water mains and sewer lines poses an element of risk you don’t see on other types of construction because of the depths crews work in, which can be around 15 to 25 feet or more.

Attention to safety and proper shoring are critical.

Underground is also an exact science in terms of grading and elevation.

Darien’s approach is to assess a job and plan out exactly what is needed at every phase before any digging begins.

At each step, he explains to the team what needs to be done, encouraging them to think strategically so they can start to solve problems and eventually run their own jobs.

“He shows us how to do it the right way and makes sure we understand the order of how things need to happen,” said Jeremy Young. “Darien double checks everything. He’s really on top of it.”

Beyond his technical expertise, it’s Darien’s enthusiasm as a mentor that makes guys want to work hard for him and in turn, enables them to accomplish large projects such as installing all of the utilities for Monterey Airport’s Runway Safety Area project in 2015 and the Graniterock/DeSilva Gates joint venture under way at San Francisco International Airport.

“I just love to see people succeed,” Darien, 50, said. “If you spend time with me and prove yourself, there’s no reason you can’t be a foreman.”

Darien doesn’t have to look far for talented workers. Both of his sons, Doug and Clint, work in Graniterock’s Construction Division, as do several of their friends.

His home in Prunedale was a hangout for the boys and their friends growing up, and all took a liking to Darien and admired his work ethic.

There was always a project going at the house and Darien never hesitated to task the kids with manual labor.

From his pool of family and friends, Darien’s recruited some of the next generation’s construction leaders, including Olon Hicks, who became a Graniterock foreman three years ago at the young age of 24.

Olon was one of the kids hanging around Darien’s house who had the desire and skills to succeed.

“If you’re the type of person who wants to work and learn, Darien’s going to teach you everything he knows and push you to do more,” Olon said. “If it weren’t for him, I wouldn’t be where I am today.”

There are a few essential rules for joining his team: Listen, tell the truth and work hard.

“If you have respect, a firm handshake and work hard, that’s all it takes for me to take you under my wing,” Darien said. “If you’re lazy, I won’t even offer.”