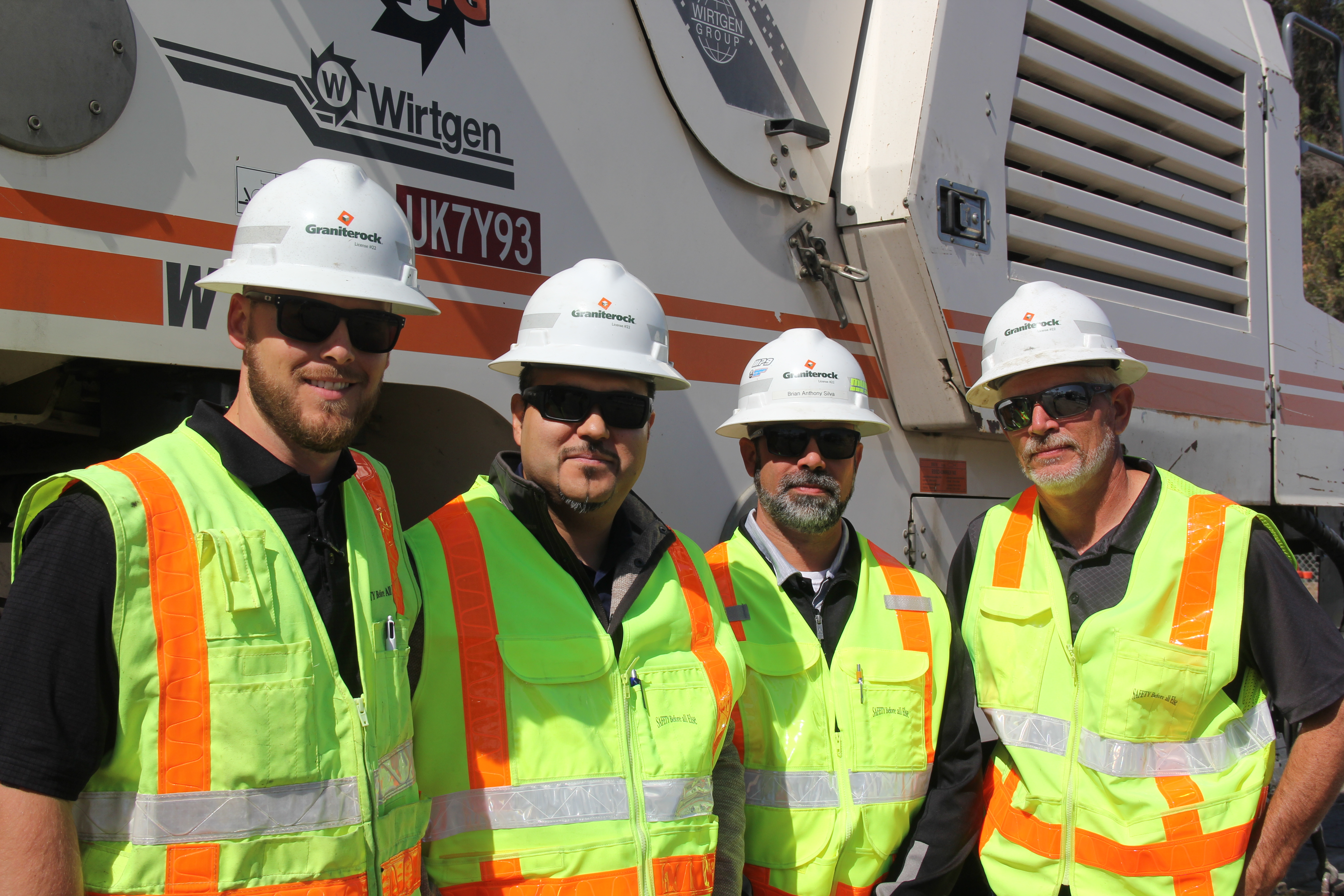 This construction team leads the charge on cold-in-place recycling

HAYWARD – The Wirtgen 3800 recycling machine, moving slow and steady down the street straight as an arrow, pulverizes six inches of old worn out asphalt as it goes.

The chewed up asphalt is immediately re-mixed with oil inside the Wirtgen for a fresh life and spit back out where it’s picked up by a paver and put back down like it just came from a hot plant.

In the amount of time you can catch up with the project manager about how the job is going, the Wirtgen and paver are a mile away and the recycled pavement is getting compacted with a roller.

Cold-in-place recycling with foamed asphalt is a pavement rehabilitation technology used by an increasing number of public works agencies. These agencies are using CIR to help knock out millions of dollars' worth of repair backlogs in a more timely and cost efficient manner.

“There are two questions every agency asks when we talk to them about foamed asphalt CIR: Is this a proprietary process? And do you have a Caltrans spec?,” said Dennis McElroy, head of Graniterock’s CIR team, which was acquired from FMG in 2014. “Yes, we have a Caltrans spec, and no, it’s not proprietary. There’s a lot of competition out there for cold-in-place.”

The conversation between Graniterock’s CIR team, engineers and public works leaders has taken a U-turn in the past year since Caltrans granted a non-standard special provision to use foamed asphalt (CIR-FA) technology in 2017.

CIR with foamed asphalt was a tough sell early on as not many agencies had been educated on efficiencies and savings associated with CIR, which has been around since the 1980s but not widely used.

Without a Caltrans spec, there was hesitation from cities and counties to try a technology outside the traditional "remove and replace" method, despite substantial savings in use of new materials, trucking, time, traffic impact, waste, carbon emissions and money.

Not to mention superior results.

Foamed asphalt works by injecting small amounts of water and air into the new binding agent at high pressure, resulting in the asphalt foaming and expanding to around 20 times its original volume.

By adding the foam binding agent, the rehabilitated pavement section creates structural value, which allows the final surface layer to be reduced.

The thinner final surface results in lower costs for purchasing new hot mix asphalt and hauling that material to the project.

With the state’s backing, cities and counties have been more receptive.

A good number of agencies have already jumped on board and are pleased with the outcome – the cities of San Jose, Santa Cruz, Fremont and counties of Marin and Monterey to name a few.

“We have the ability with foamed asphalt CIR to erase the road’s crack history and make it stronger than before,” said Anthony Silva, the team’s veteran QC manager, present on all job sites gathering material samples and ensuring the product and process meet quality standards.

“I love that we’re challenging the status quo of traditional HMA with this technology. There’s a lot of value for cities and counties here.”

The recycler can work through a single lane two miles long in a day.

Ed Schwartz is a key player on the CIR team, the one to make sure the machine is in optimal operating condition and the crews have the resources they need.

Ed, a Marine Corps veteran who spent time in Iraq and earned a bachelor’s degree in construction management from Pittsburg State University, was introduced to CIR in 2011 while working for Condor Earth Technologies.

“I have five trucks out here today compared with 30 if it were a conventional paving project,” Ed said as the team recycled Calaroga Avenue in Hayward. “One of the things about CIR most appreciated by the owner and the public is there’s no shutting down the road for a week while we rebuild. If you want the road reopened by the end of the day, we put the fog seal and sand down, pull the cones and reopen to traffic.”

Turning CIR skeptics into proponents has been extremely rewarding for Miguel Zarate, who’s been on the CIR team since 2005.

A crowd gathered around the Graniterock booth at a recent League of California Cities Public Works Officers Institute and Expo, very interested in how the technology works.

Lots of questions were asked, prompting in-depth discussions on how and where CIR works best.

Miguel said he had several conversations with one engineer in particular who read through all of the data, articles and white paper that were on a thumb drive handed out by the CIR team to expo goers.

“He read every single thing we gave him about CIR and kept coming up to ask us more questions. He wanted to know everything because he had never used CIR before,” Miguel said. “He ended up engineering a job for the city of Millbrae with an addendum for CIR. We made him a new proponent through education.

“I consider that a big win.”