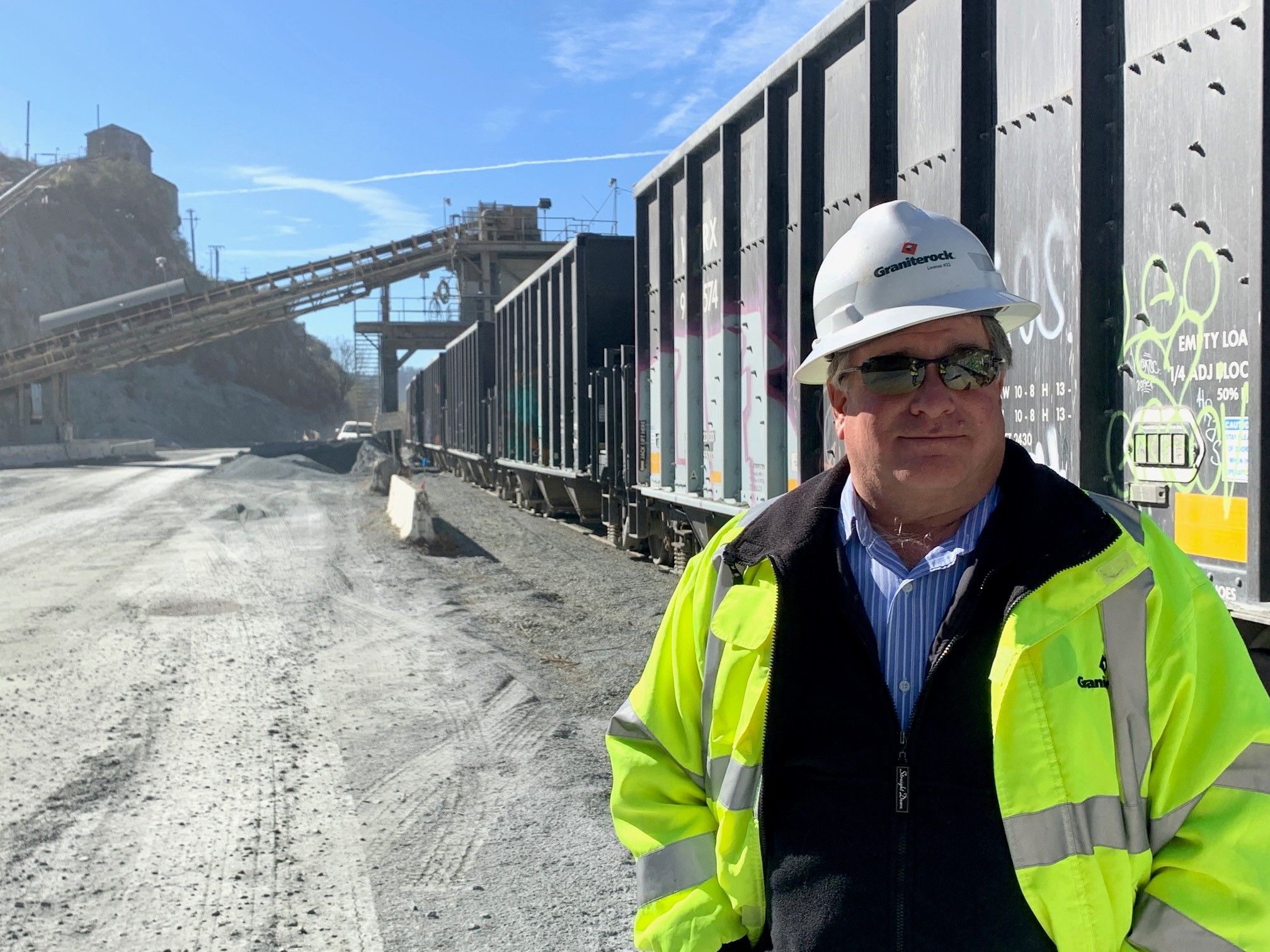 Rock and Rail: Construction career on the right track

AROMAS – Dan Slavin had his hands full when he switched his construction career to rail operations.

In 2005, he went to the company’s late president Bruce W. Woolpert and asked to move from aggregate sales and production to managing the 300 rail cars that haul rock and sand to Graniterock concrete and asphalt plants in the San Francisco Bay Area.

“I asked for the rail job,” Dan said. “I’ve always had a real interest in rail.”

At the time, relations between Graniterock and Union Pacific – owner of the tracks that run next to the A.R. Wilson Quarry – strained under skyrocketing shipping rates, contested fuel surcharges and generally poor service, according to Dan.

The railroad and Graniterock were at such odds that common multi-year contracts screeched to a halt, which made aggregate shipping by rail difficult and unpredictable.

Dan was tasked with fixing the relationship and getting the company’s rail service back on track.

His worked started in earnest with a trip to Washington, D.C. in 2005 to testify as an individual shipper in front of the Surface Transportation Board, a federal agency charged with regulating freight rail.

“UP had more business than it could handle, so, large annual rate increases and poor service were common with rail shippers.” Dan said. “In some cases, the rates increased 30 percent from the previous year. At that point it was cheaper to truck our aggregates.”

Whether Dan’s testimony and management helped drive changes in the rail company’s approach or UP had a change in heart, relations slowly improved.

In recent years, Dan and Graniterock’s negotiating team have been able to negotiate a long-term contract beneficial to both parties.

Today there is a sense of collaboration rather than each side blaming the other when issues pop up.

Much credit can be given to Dan and his ability to straddle the line between aggressively advocating what’s best for Graniterock and working as a cooperative partner with the rail company.

“Rail is critical for helping Graniterock get aggregate into the Bay Area competitively,” said Don Barrett, the company’s aggregate sales manager. “Dan is perfectly suited for this position because he understands the process and knows how to work with the railroad for a win-win relationship.”

Today, some 50 or more railcars, each filled with 115 tons of rock and sand, get pulled by a Union Pacific freight train 80 miles north from Aromas to plants in San Jose, Redwood City and South San Francisco.

For the return trip. UP crews take empty cars from the previous night’s delivery to the quarry to load again.

It’s a cycle that gets repeated five nights a week.

Dan, a Salinas resident, had a number of stops in the construction industry before arriving to the train spot.

The Bay Area native jokes he imagined selling computer chips while growing up and attending school in the tech-centric Silicon Valley.

But after college at San Jose State, Dan joined Kaiser Cement Permanente in Cupertino to sell aggregates, a different kind of “chip,” so to speak.

Dan took an aggregate sales position at Graniterock in 1988 and after a few years became the sales manager until 2004.

He sought experience in operations and was put in charge of the company’s three sand quarries.

He also served a brief stint managing the Wilson Quarry until feeling the pull to rail.

It might not be surprising that someone fascinated by trains and how they operate would also be a motorcycle enthusiast in his free time.

Dan has been for many years a Harley Davidson guy, owning three at one point.

He thrives on heading out on his bike to places such as Santa Barbara and Paso Robles, though Yosemite tops his list of favorite destinations.

Dan also enjoys a good round of golf, where he can get out any frustration if, say, the trains don’t run on time.

“I’ve been at Graniterock 32 years now,” he said. “I feel fortunate that I’m able to help create a strong link between the company’s aggregate source and our concrete and asphalt plants. Rail is key to our supply chain.”