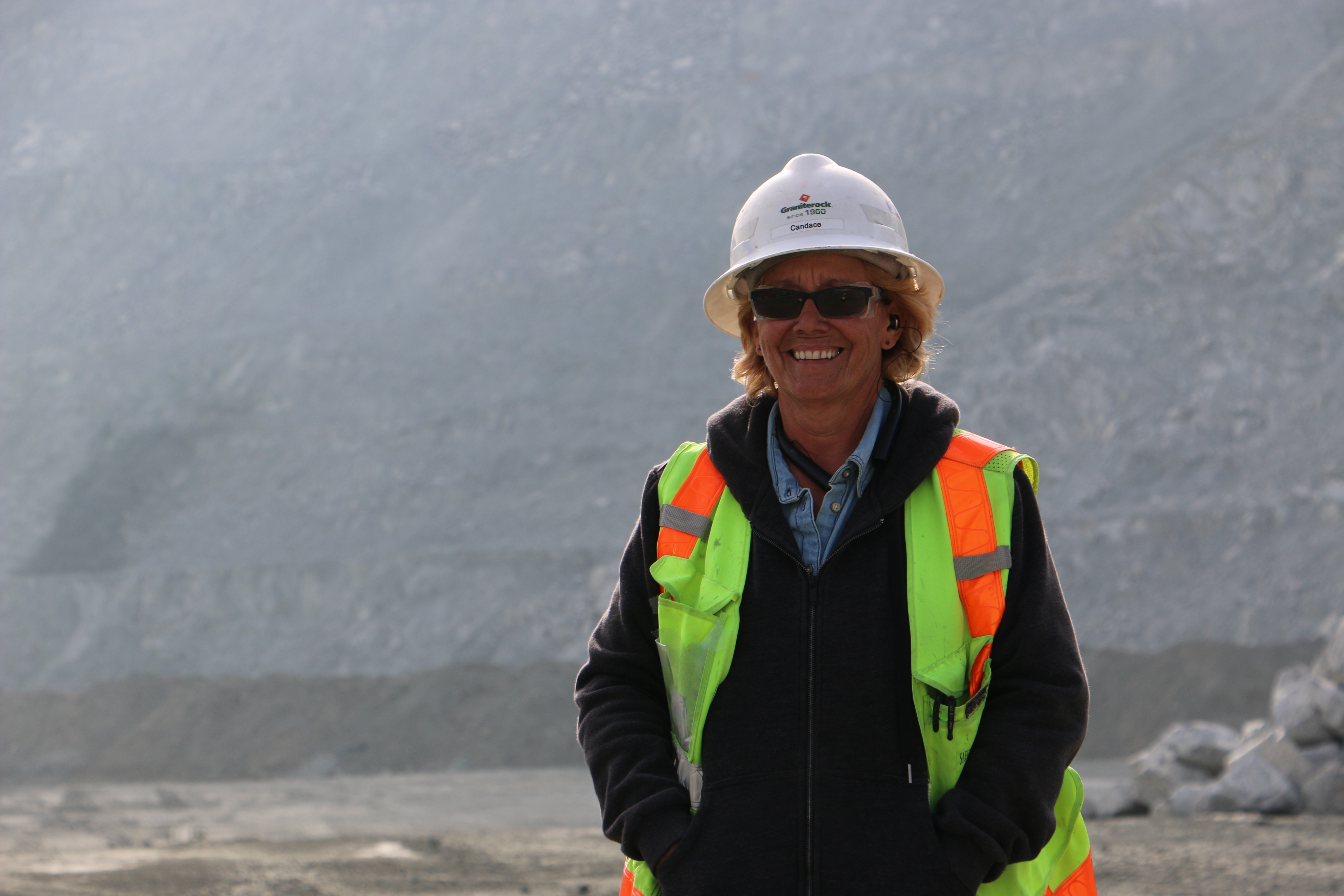 AROMAS – Candace Klein is a rare sight in a predominantly man’s world.

But don’t start stereotyping because she’s comfortable getting dirty, running heavy equipment, putting in long hours and telling men how to do their jobs.

She’s tough as nails, which is why Candace commands respect in this rugged environment.

“Candace knows how to roll with the punches with all of the constant change,” said Jeremy Hunzie, who leads Graniterock's primary team at the A.R. Wilson Quarry. “She keeps the crews engaged and motivated. She keeps them bought into the ever-changing plan, and that’s huge.”

From about 6 a.m. to 6 p.m. Candace is in her truck, talking on the CB radio, driving the A.R. Wilson Quarry’s two-mile-long mining area with a sharp eye on everything.

As a key player in Graniterock’s aggregate operation, her job is to make sure the primary mining team follows the daily production plan, which is usually high volume and subject to change at a moment’s notice.

There’s heavy equipment operators to oversee – those who drive the dozers, loaders, scrapers and haul trucks – as all the pieces need to work together seamlessly to get the rock from the mine face to the Krupp crusher and onto the conveyor belt for secondary production.

She won’t hesitate to jump on equipment or move the Krupp to a new spot.

She and her dayshift team focus on setting up production for the graveyard crew to come in and hit the ground running for a robust and safe mining shift.

There’s a lot of moving parts to aggregate production, and Candace, an 18-year veteran of Graniterock, has a strong grasp on them all.

“I really love my job and the people I work with are like family,” she said. “They’re the people I spend most of my time with. Everyone cares about each other and that goes a long way.”

Before the quarry, Candace worked at a cedar mill in a tiny mountain community east of Sonora called Pioneer.

She grew up in Pioneer with five siblings and her parents.

It was at the mill, beginning in 1979, Candace learned to operate heavy equipment and figure out how to succeed in a place where women weren’t warmly received, if at all.

When she showed up to turn in an application, the security guard said, “Oh honey, they don’t hire women here. You’re wasting your time.”

A year later they did, and Candace stayed for 20 years until the mill went out of business.

She’d never heard of Graniterock until a friend and former mill colleague called to say the company was hiring operators at the quarry.

She came on in August 1999 as a scraper operator and spent a short time with Graniterock’s Construction Division during a lull in aggregate demand.

Candace worked graveyard for 11 years, night after night operating a loader filled with blasted aggregate to dump the into the jaws of the Krupp.

She didn’t mind those long, dark nights due to the camaraderie of her teammates.

“We knew each other so well on the graveyard shift,” Candace said. “We had the high phone bills to prove it because we’d talk to each other all night just to get through the tiredness.”

There’s only a few things Candace would rather be doing than making rock, and that’s camping at Mt. Madonna and spending time with family.

“I’ll camp anywhere, but I love Mt. Madonna,” she said. “It reminds me of living back up in the mountains.”