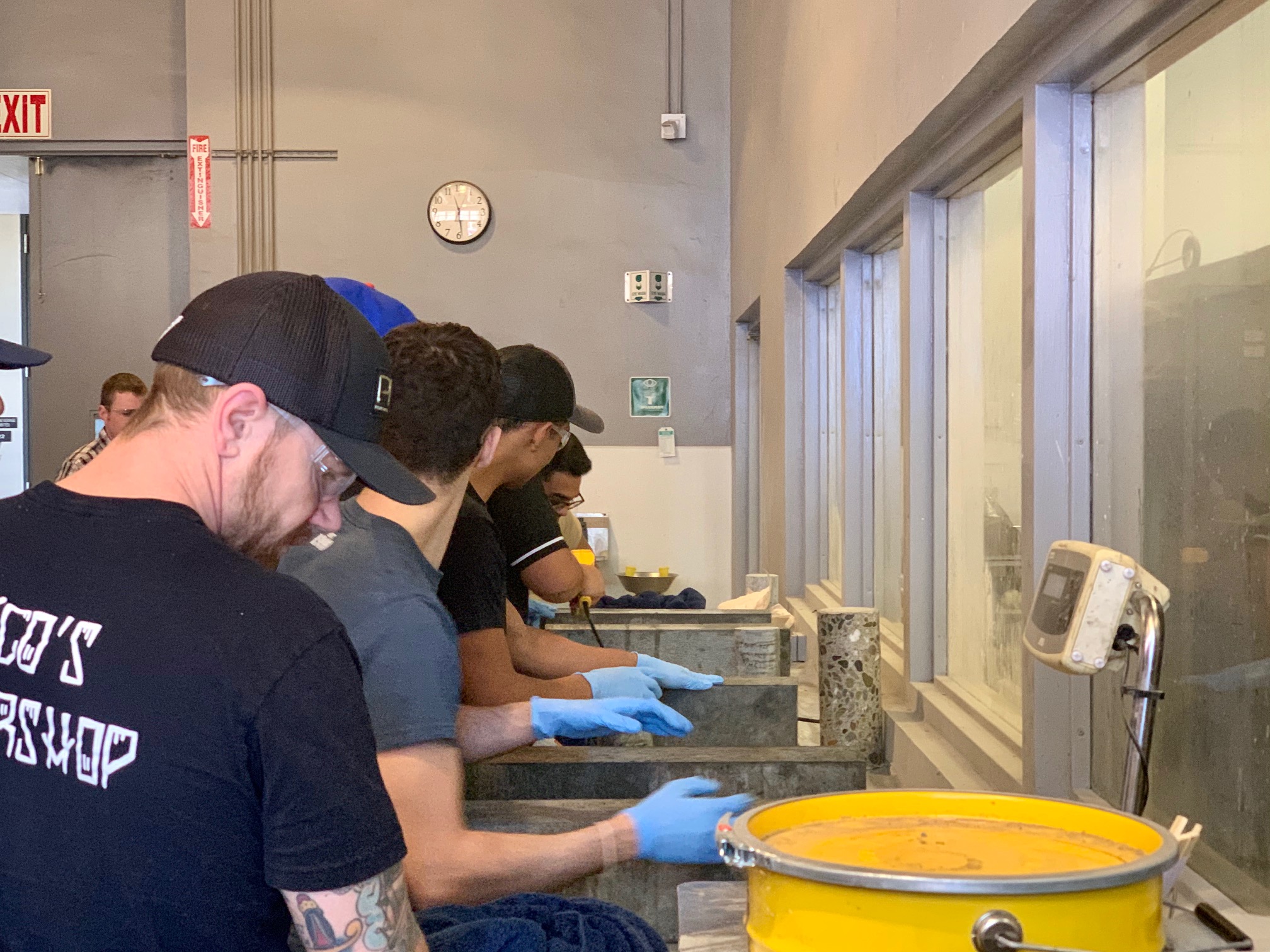 How one California university is shaping future of the concrete industry

Before the students dash off to glue carbon fibers to concrete cylinders and beams, Mohammed warns of the power of epoxy.

“This is ultra-high strength epoxy and can glue your hands shut. Do not joke around with epoxy,” he tells the group of men and women ages 18-22. “I would highly recommend doubling up on gloves today.”

The students, all seeking Bachelor of Science degrees in concrete industry management, seem to heed Mohammed’s advice as they move swiftly through the tasks of grinding the cylinders’ surface for better adhesion, applying heat with a hairdryer-like gun and ultimately attaching a sheet of thin black fibers.

Everyone makes it through without their fingers stuck together.

Best of all, they discover how adding fiber can control cracking and reinforce aging concrete, which is something they’ll likely see again and again in their concrete careers after college.

“This is a way to rehabilitate older buildings and structures that have seen a lot of wear and tear,” Mohammed explains. “Carbon fiber is gaining momentum in that area.”

Chico’s concrete industry management (CIM) program is one of four college programs nationwide that combine classroom lectures with hands-on lab applications centered on concrete that mirror what happens at batch plants, construction sites and materials laboratories in the real world.

In addition, students are required to take a mix of business classes for a minor from Chico’s College of Business.

The 14-year-old specialty program in the Northern California college town, 90 miles north of Sacramento, was born from the country’s need to fill openings in a $100 billion industry that employs roughly 600,000 people and whose industry leaders are committed to attracting young talent through investments in education.

“Our industry is age challenged,” said Doug Guerrero, chairman of the program’s patrons board. “We grew older and did not do a good job replacing ourselves. We need highly trained professional graduates who are trained in the many facets of our industry.”

Doug, a retired Cemex executive, is part of a group of industry leaders responsible for bringing CIM to the Chico campus in early 2006. Other early supporters include Dana Davis of Teichert, Bill Albanese of Central Concrete, Allen Law of Quikrete, Greg Odenthal of Pinnacle Consulting and Gene Ceccotti of Shamrock Materials.

The patrons are actively working to expand the program and encourage more concrete companies to support internships, job openings and scholarships.

The concrete program, housed in the College of Engineering, Computer Science and Construction Management, seriously prepares students to walk onto a job site after graduation and succeed.

The numbers prove it’s a worthy degree as 100 percent of concrete students land positions in the industry after graduation, and many reportedly have climbed the ranks in a quick fashion.

For Professor Feraidon Ataie, a degree in concrete makes perfect sense as it is the most used material in the world besides water.

Much of society is made from concrete – from roads, dams and bridges to schools, homes and hospitals.

To educate someone on the science and application of concrete, he said, is to set them up for a fulfilling career that can weather the ups and downs of the economy better than almost any other area of construction.

“You can make a good life in concrete,” Ataie said. “It is everywhere, and you can do so many things with concrete. These are not minimum wage jobs.”

Feraidon and Mohammed are the only two tenure-track professors for Chico’s concrete department, with a current matriculation of 90 students.

Both professors received doctorates from Kansas State University in civil engineering with an emphasis in structural materials.

Feraidon hails from Afghanistan, where he studied civil engineering at Kabul University and worked for an engineering firm before learning of a full-ride scholarship for a master’s degree in Kansas.

Feraidon found his way to Chico State six years ago, and delivers passion for the subject as much as he does the science.

In his plan-reading class on the fourth floor of the engineering building, students learn one of the most important parts of any concrete project: How to calculate surface area, volumes and estimate costs.

He hands each student a sheet of paper with a drawing and measurements for a slab-on-grade house foundation. Their job is to figure out surface area, slab thickness, how much concrete they’ll need and estimated project cost.

“We’re not here to memorize,” Feraidon tells the class as he walks through each calculation on the overhead projector. “We’re here to understand the process step by step.”

Mohammed was drawn to engineering at a young age. His father urged the contractor building the family home in Dubai – a cosmopolitan city in the Middle East with towering skyscrapers and state-of-the-art infrastructure – to put Mohammed on the crew.

He remembers looking at the foamy admixtures and thinking the contractor had added soap to the cement.

The experience of working with bricks and mortar stuck with Mohammed as he attended American University of Sharjah on a scholarship from an UAE general contractor at Dubai’s mega international airport expansion.

A Kansas State professor on sabbatical in Sharjah told Mohammed, after seeing his aptitude for engineering lab work, to contact him when he was ready for graduate school.

He arrived in Chico three years ago.

“I love teaching and helping the students,” he said. “This program brings so much value.”

A total of $5 million has been donated since its inception, creating a strong academic-industry partnership.

Donations are used for scholarships, new lab equipment and opportunities for students to travel to events such as World of Concrete and National Precast Concrete Association’s student competition each year.

“Our graduates are sought out and competed for” Doug said. “Their education and enthusiasm make our industry better.”