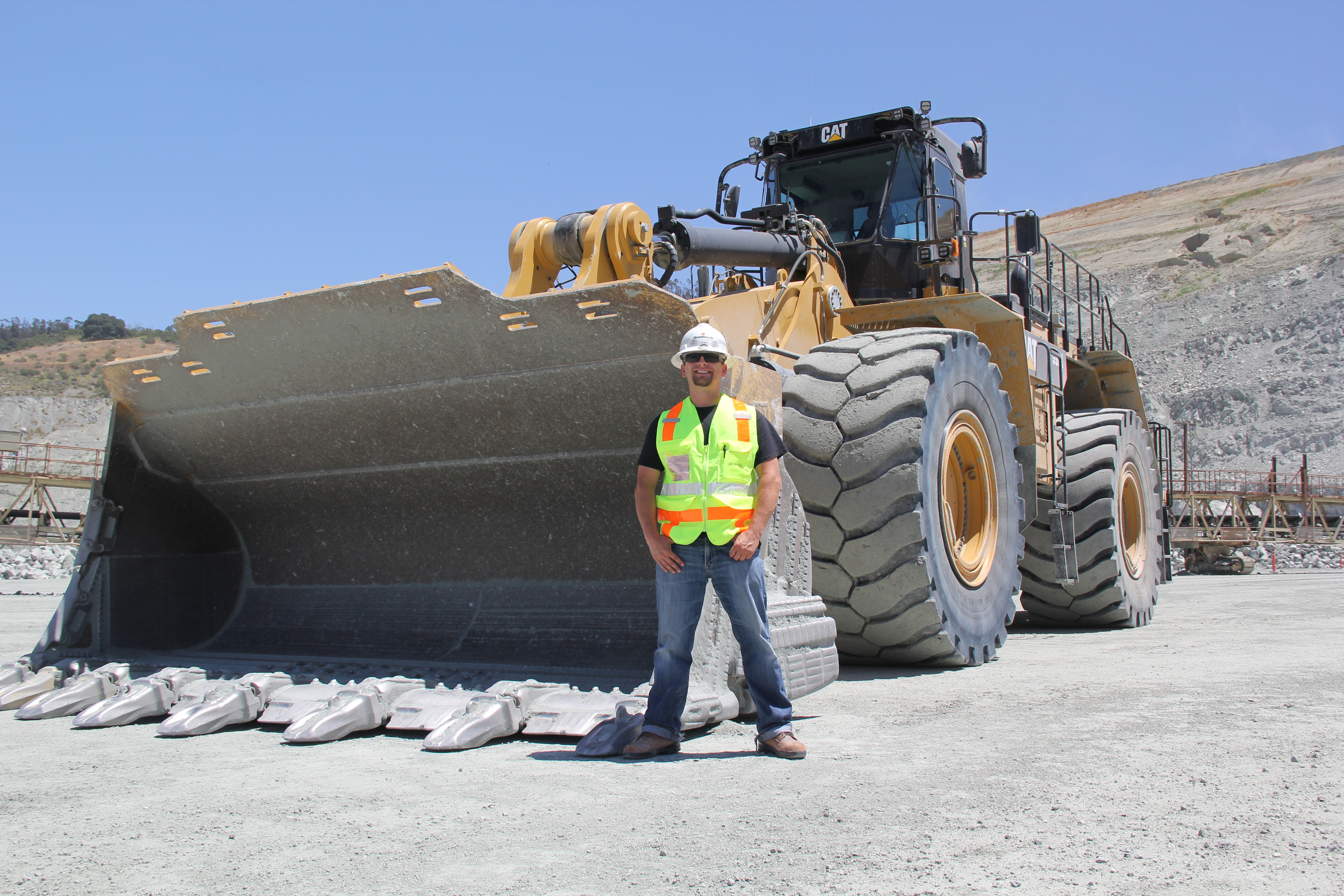 Aromas – Every morning Bobby Brewer climbs seven steel rungs up the side of a 992K Cat loader at the A. R. Wilson Quarry, slides into the cab, cranks up Metallica on XM Radio and starts living his childhood dream.

Sitting 19 feet off the ground, Bobby grabs the loader’s steer stick with his left hand and maneuvers the yellow behemoth to an area of blasted aggregate he scoops up, 16 yards at a time, and bails over a 250-foot bench, where it will to be picked up and fed to Graniterock’s primary crusher.

For eight hours or more, the 38-year-old heavy equipment operator moves the loader with speed and precision while James Hetfield’s gritty voice takes over the cab.

“Metallica, that’s how we move the rock,” Bobby says.

This is the real-life version of how Bobby spent his time as a kid playing with Tonka toys in the front yard of his family’s Hollister home.

At the Graniterock hard rock quarry in Aromas, he lowers the bucket, using the two joy sticks controlled with his right hand, lifts up the gray-blue rip rap, rolls toward the bench edge and tilts the bucket so rocks stream out like a waterfall to the quarry floor.

Then he smooth shifts into reverse, and repeatedly rips rock from the pile over and over again until quitting time.

“If we’ve got 50,000 tons of rock to move, I send Bobby over there because I can count on him getting it done,” said Jeremy Hunzie, one of Graniterock’s quarry managers. “He’s super eager to learn and be the best.”

Bobby, an Aromas resident who can hear the Krupp rock crusher working at night to break up the aggregate he helped mine during the day, didn’t come to the operator life by accident.

There was nothing else he wanted to do since the Tonka days.

“This isn’t just a job,” Bobby said. “Working as an operator at Graniterock has always been my dream. I feel like a force to be reckoned with when I’m in the loader.”

Bobby found his way to Graniterock in 2006 when he learned about a temporary position driving haul truck at the quarry.

He had already earned a great deal of commercial driving experience with jobs after high school, including driving for a beer distributor and hauling concrete on the snow-covered highways of Olympia, Wash.

When the haul truck gig was up, the economy had started to tank.

Graniterock, trying to avoid mass layoffs, moved Bobby to driving a mixer truck based at the Watsonville concrete batch plant, which has since closed.

But the Quarry was always in the back of his mind, and he made it his mission to one day be back there in a permanent position.

When Bobby finally returned to the Quarry, it was a job in the maintenance shop servicing the haul trucks.

It wasn’t long before there was another haul truck driver opening, but this time he clocked in around 7 p.m. and didn’t leave the Quarry until early the next morning.

He moved to the 992K loader after a couple of years.

It was eight years in all that Bobby spent on graveyard moving rock.

He’s now on the day shift and a key member of the team that ensures Graniterock produces enough aggregate to supply construction projects throughout Northern California.

He pushes himself and the loader every day to work as safely and efficiently as the machine will go.

Sometimes Bobby sets up the video on his phone so he can later analyze his work and pinpoint how to work and move the machine in ways that bring greater production.

“What I’m most proud of in my career at Graniterock is that I’ve had 10 different jobs and I’ve been safe at every single one,” Bobby said. “I’ve been accident-free for 12 years.”

In his personal life, Bobby is a single father of four – three boys and one girl – who likes to watch drag racing at the strips in Sacramento, Bakersfield and Sonoma.

He’s working on fixing up a 1974 Vega, and hopes to one day get it on the raceway.

Until then, he’ll be in the loader with a smile on his face and the heavy metal blaring.