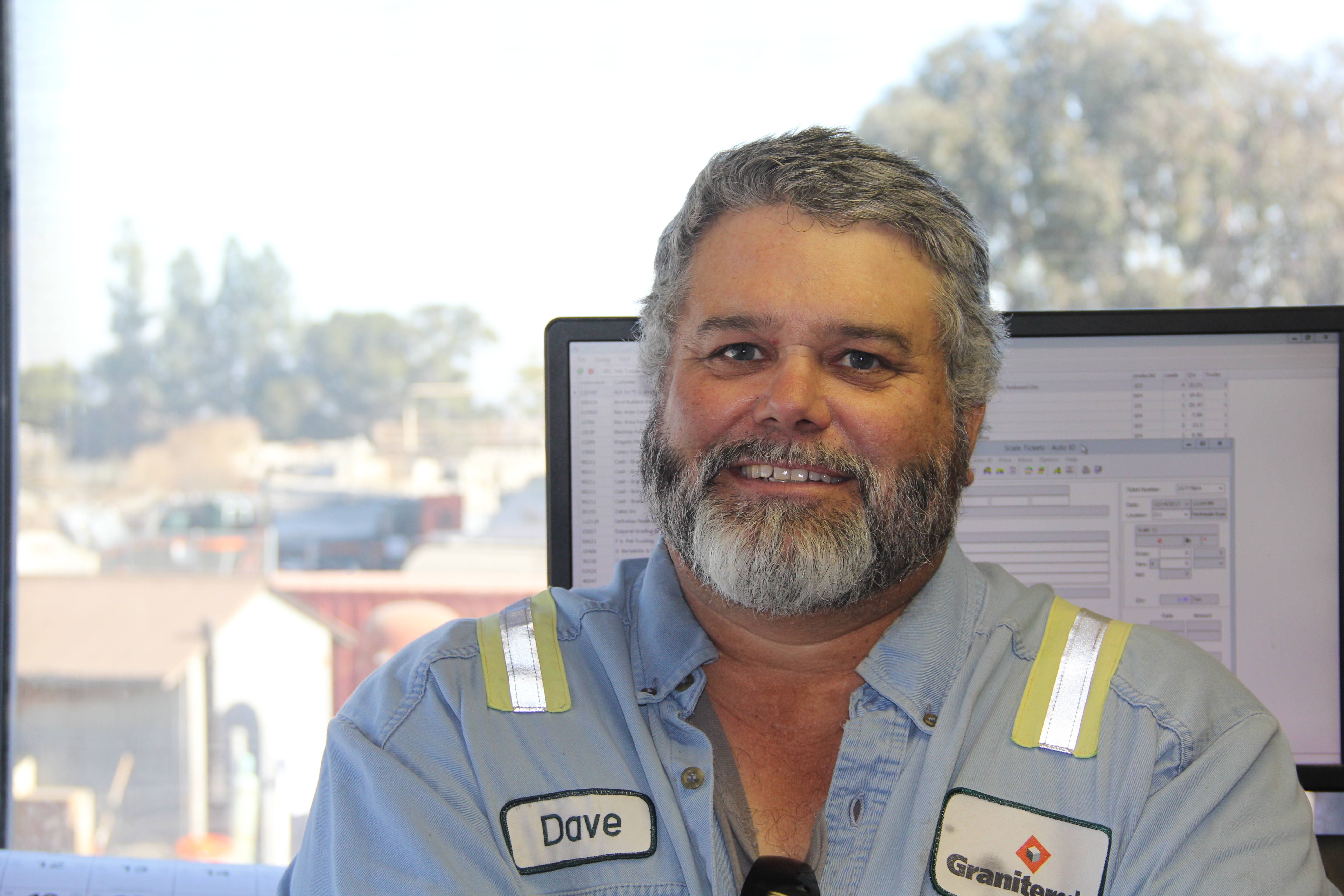 REDWOOD CITY – Dave Voris had never seen a spreader truck, much less driven one, when he interviewed for the job of spreader truck driver at Graniterock in 1995.

“I had my Class A commercial license and knew I could drive anything,” he said. “It turned out to be a great fit, both the company and the job.”

Coming from Langley Hill Quarry near La Honda, where he was introduced to heavy equipment and industrial work after graduating from Pescadero High School in 1987, Dave was well equipped to handle Graniterock’s spreader truck and more.

The spreader truck - essential to any asphalt paving project - requires a high degree of technical skills to operate. It turned out to be just the new challenge Dave was looking for, allowing him to get acquainted with Graniterock’s Construction Division paving teams and the company’s asphalt customers.

Dave eventually moved on to manage the rail pit and run the loader at Graniterock’s asphalt plant in Redwood City until ultimately, 10 years ago, he advanced to plant engineer.

“Dave is a shining example of how Graniterock team members combine their talent and personal drive for career development with the company’s culture of lifelong learning,” Vice President Rich Sacher said.

Drawing on his previous experiences, Dave oversees all operations at the plant, including aggregate stockpiles, oil orders, plant maintenance and which mix designs the plants produce each day.

If a special mix request comes in, Dave adds it to the rail order and makes sure there’s space on the ground for the raw material.

From the control tower at the back of the drum plant, he has a bird’s eye view on the stockpiles and customers trucks getting loaded.

His work requires constant coordination, ensuring there’s enough raw material on hand to produce the hot mix asphalt required each day, and that the drum and batch plants are running at full capacity as demand has been at record highs in recent years.

Dave is calm, not easily agitated, which helps him succeed in a high pressure environment with lots of moving parts.

It’s not unusual to find him at the plant six days a week, all hours of the day or night, when customers have night and weekend projects.

The word “no” isn’t in Dave’s vocabulary.

“The only time I say no to a customer is when we don’t have the people or the product,” Dave said. “I really don’t like to say no.”

Dave, a lifelong La Honda resident and father of two teens, was drawn to the Langley Hill Quarry by his grandfather Charlie Johnson, who found weekend work for him there during high school.

It was at the basalt rock quarry he got his start on a track that would take him to the spreader truck and beyond.

“This is my life,” he said. “It’s all worked out really well for me at Graniterock.”