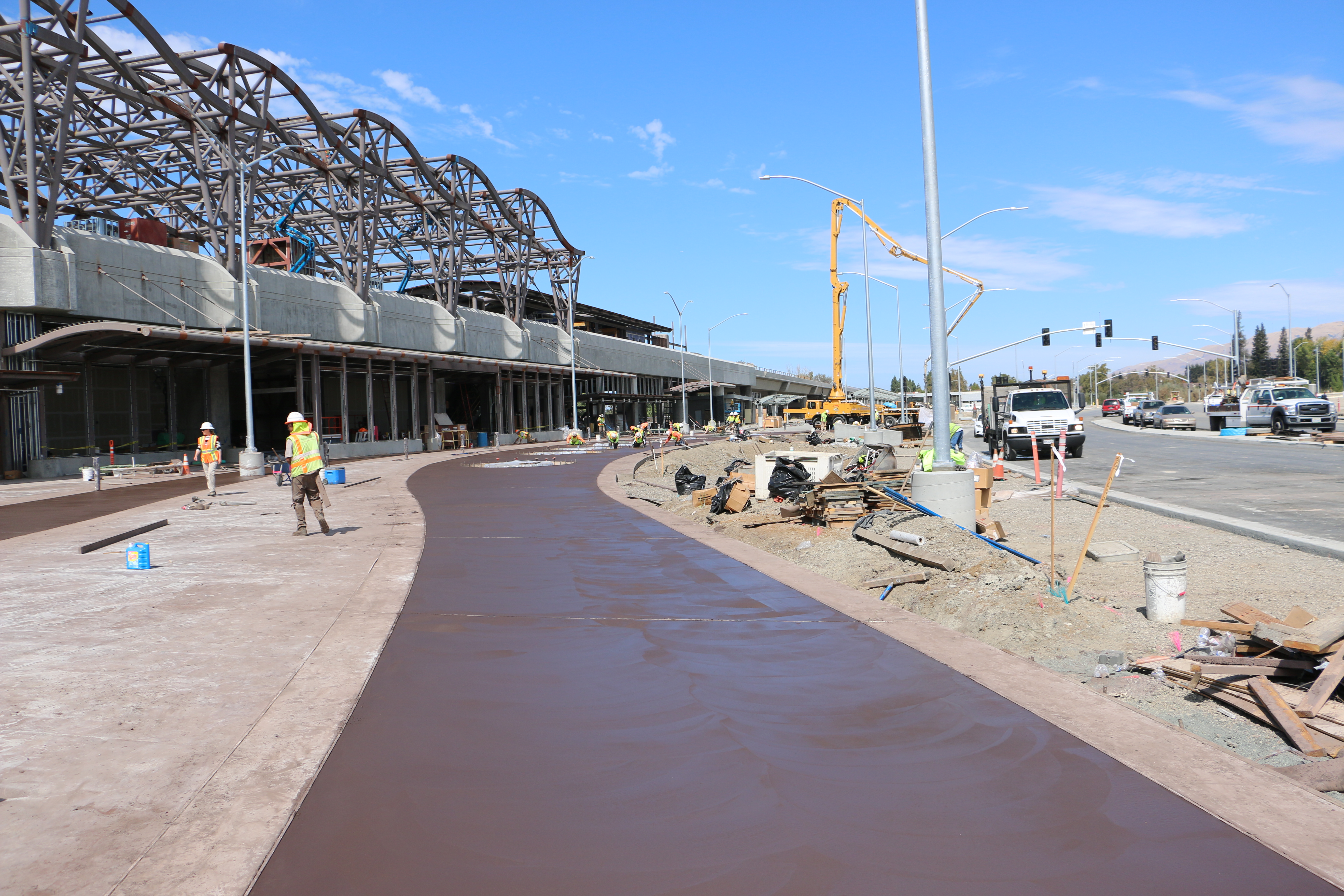 SAN JOSE – Successful completion of a new station for BART to extend from Fremont into San Jose, working alongside two other major contracts, doesn’t happen without clearing some pretty high hurdles.

Graniterock’s $29 million job for Santa Clara Valley Transportation Authority started in fall 2015 on a 15-acre site between Berryessa and Mabury roads and will come to a close soon.

The project is designed to alleviate some of the South Bay’s heavy traffic congestion by increasing the reach of public transit.

An ongoing challenge on the VTA project was coordinating use of the site with the other contractors: joint venture of Skanska-Shimmick-Herzog, who built the Bart train line, and McCarthy Construction who built the multi-level parking structure.

To add to this challenge, Graniterock added our own structures subcontractor, Roebbelen, into the mix to construct a police station, an ancillary building and bus canopy.

Project Manager Dave Olivas credits Superintendent Chuck Schlough for great communication and coordination with the other contractors so that everyone could have access and get their work done in a timely manner.

“This could have been a disaster with three major contracts taking place and all sharing the same property lines with limited access. To get through this successfully however, we needed to get along with our neighbors, but remain in control as we had the biggest rights to the campus,” Dave said. “This is where Chuck did his best.  The other contractors really respected him and us for the way he kept access to everybody and without missing a beat when it came to our work.”

Having a building subcontractor is not something we do every day.

So after the first two months of over 100 submittals and pushing 100 RFIs, we decided we needed some administrative help.

Angela Montes was fantastic at getting us started as her knowledge of VTA policies and procedures is the best.  However, we were quickly getting buried.  Through an agency, we recruited Diana Rodriguez who kept us on top of the game (she now has full-time position at our Hellyer office).

We added Lam Truong as a project engineer.

“His contribution couldn’t have come at a better time” said Dave.  “He knew concrete and we were just heading into our toughest concrete paving on the job.  He took the task and ran with it.  It would not have been such a success without the ownership he embraced, his attention to detail and the way he worked with the crews. He is a great addition to our Graniterock family.”

Rounding out the management team is another project engineer, Michael Robles, who joined us full-time after interning while a student at San Jose State.

“Michael has been on this project almost from the beginning and it has been a pleasure watching him grow,” said Dave.

The first order of work was the underground.  The underground crew, led by Darien Shirk, placed more than 7,000 linear feet of pipe up to 15 feet deep.

They started in fall 2015 and worked through the first winter placing this pipe.  Their biggest challenge was when they ran into an underground stream.  With calm and cool heads, they completed the work safely and impressed the VTA.

“Darien and his crew did a great job installing that pipe under these unknown adverse conditions,” Dave said.

Roadway excavation, hauling off 20,000 yards of excess soil, and lime treating the site was next on the list.

Chuck crafted a great crew which performed this work with ease.  Austin Perkins, Dewey Gerrod and Elmer Herring rounded out the core of Chuck’s early team.

Then came the 17 bioswales, which are an important element for the site’s water pollution prevention efforts.

Chuck handed this task over to Jose Moscorro and his team consisting of Lobato Chavez, Horacio Cazares, and Gabe Olivas took the task with ease. Other team members contributing to “all the other stuff” required to complete this project were Daniel Ramos, Sal Jauregui, Dave MacShate and Arnold Jaquez.

Finally came the part of the Berryessa campus everyone will remember, the decorative concrete plaza.  A big high-five goes to the two concrete crews led by Rodney Cortez in installing and finishing this work. There were more than 6,000 yards in all, most of it pumped.

“With the large quantity of concrete on this project, the crews really stepped up to the occasion to make sure the timing of trucks was reasonable, smoothing out the top surface and working overtime if needed. Plus, starting at 6 a.m. on pour days,” Lam said. “They understood the importance of work and helped assure the decorative concrete plaza would meet every expectation for the VTA.”

All of the work ran more smoothly due to One Company planning and coordination that ensured all of the concrete, asphalt and aggregate base never skipped a beat in terms of quality and on-time delivery.

“The Northern Concrete dispatch team was very helpful in getting us scheduled,” Lam said. “She always made sure our order was taken care of.”

Mike McGrath helped plan the colored concrete and made sure everything was ordered for the Berryessa plant well ahead of time.

Help with the 14,000 tons of asphalt paving came from Brent Edelman along with Justin Burkeof the Northern Road Materials team.

One of the highlights from this project was the successful relationship the Graniterock team developed with structural contractor Roebbelen, which Dave says could pay off down the road when there’s a chance to work together again.

Foxx praised the project as a critical piece in improving travel times for Silicon Valley commuters.

"The country needs this region to be one in which people can get from place to place," Foxx said. "Our economy depends on it."