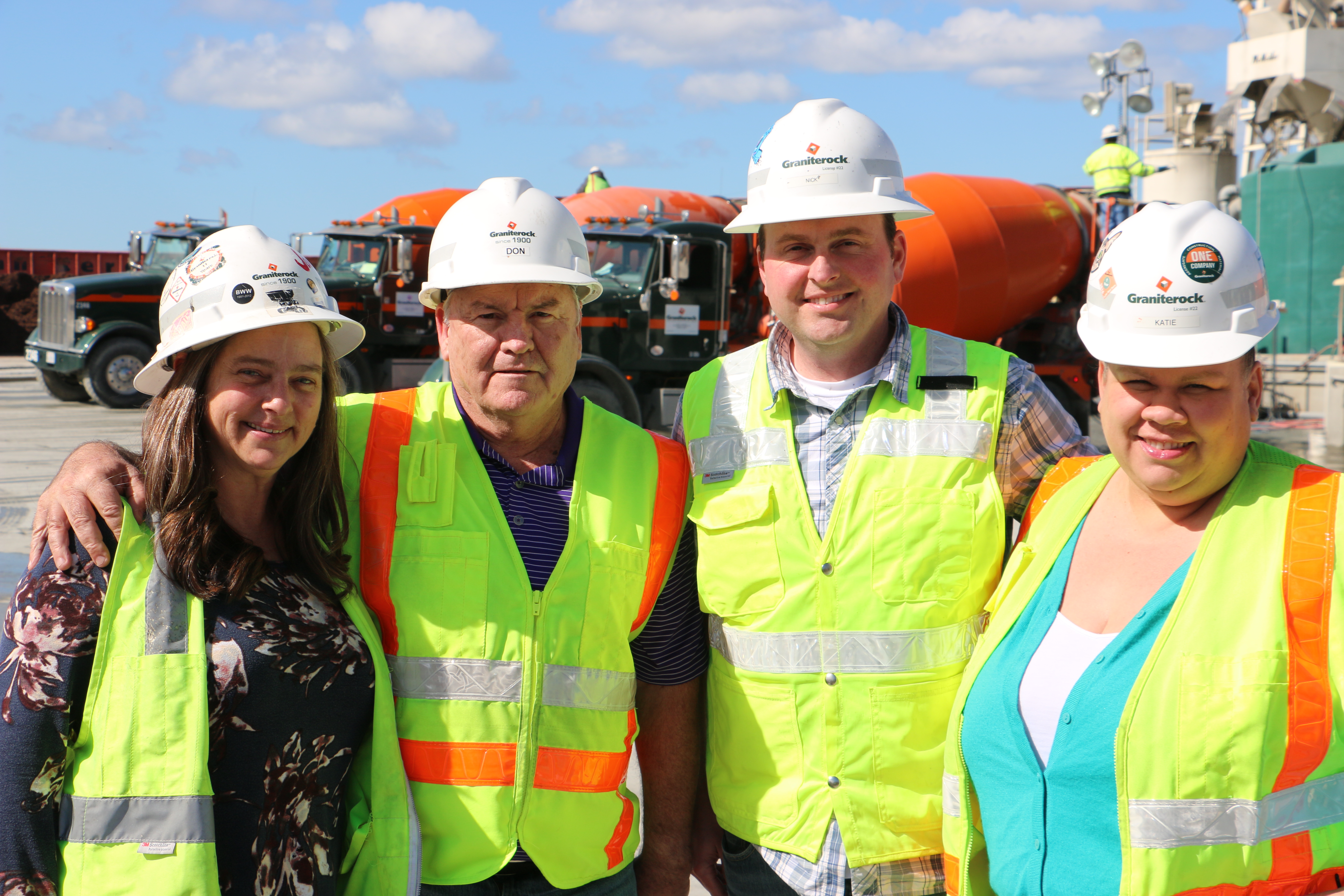 Yet, through relationships developed over the telephone, they know important details about customers’ lives, how the kids are doing and where the next vacation is planned.

The team of four – Don Birt, Jennie Stewart, Katie Handmaker and Nick Martin – operate by a simple but powerful business rule in managing concrete orders around the San Francisco Bay Area: always give people more than what they expect.

In following that simple mantra, these dispatchers build trust with the contractors who call on Graniterock and ultimately, over time, get to know them as a friend.

“If someone orders concrete to be delivered to the job site every 15 minutes, we do our damndest to honor that,” Katie said. “If they want it, we’ll do it, whether it’s a porch or a bridge.”

Dispatching can be a tricky business as demand for concrete has never been higher, and interruptions or unforeseen situations, such as a truck stuck in traffic, can set back a project, whichs costs the customer time and money.

The detailed work that goes into managing Graniterock’s mixer trucks and drivers, assuring all of the concrete gets to the right place at the right time, is like dominoes.

Any hiccup in the day’s long chain of perfectly-timed deliveries, which often starts in the dark morning hours, potentially disrupts the entire plan.

“It may not be pretty,” said Nick, the newest member of the group. “But at the end of the day, all of our customers get concrete. If we tell them we’ll be there, we’ll be there.”

The same friendly, proactive approach the dispatchers take with customers translates to how they treat each other and the Graniterock sales representatives and plant operators they work with side-by-side.

With their Redwood City and San Jose plants booked a month out, and last-minute orders continuously streaming in, there’s simply no time for discord with the phone ringing constantly and a new challenge on the other end.

However stressful the work can get, between the calls is laughter.

“We’re family,” said Jennie, who’s been with Graniterock 16 years. “We try to make it fun here because we’re all in this together. We can say anything to each other, and we do.”

They each came from diverse backgrounds before dispatching.

Don, who’s been with Graniterock 40 years, understands it’s part of his job to help new dispatchers learn the system.

After more than 10 years chiseling out old asphalt from inside dark tanks, Jennie moved into dispatching, where she keeps her clothes and hands a little cleaner.

Katie’s exceptional calm and easygoing phone manners were developed from a long career as an EMS dispatcher.

Even the most frustrated contractor can’t rattle someone who’s used to dealing with life and death emergencies over the phone.

“Dispatching concrete has made me slow down and become more personable,” Katie said. “This is different from 911 because I talk to the same people every day. There has to be a personal connection to be successful.”

Nick is the newest member of the team, joining Graniterock after a career as a public transit driver in Santa Cruz County. In addition to taking concrete orders, Nick is responsible for all of the fuel for the plant and fleet of mixer trucks.

“It’s pretty important,” he said. “If we don’t have diesel, we can’t operate.”

Don is considered the kingpin of the group. At least that’s what the Marlon Brando poster behind his desk would have you believe.

He’s ruthless only in his laser focus getting trucks to the right place and making fast changes on the fly.

“We all know we need each other to succeed,” Don said. “Everybody jumps in to get the job done. We’re always looking forward to where the next driver needs to go.