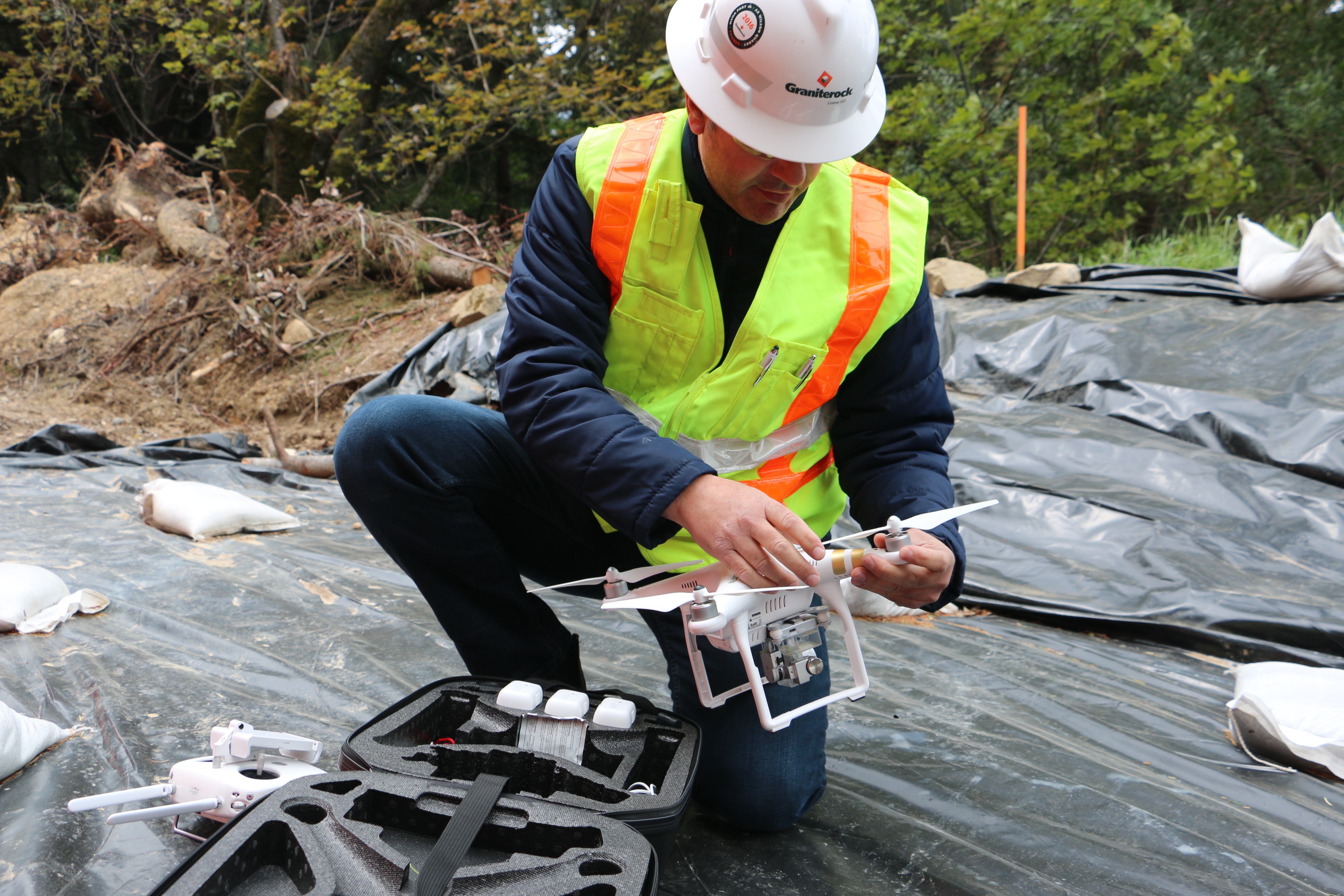 SAN JOSE – Drones have taken off in the Construction Division in a way that’s dramatically improving job safety and efficiency.

Drones are a new tool for the Company, launched earlier this year by the Construction Division’s GPS team – Dan Enachioae, Olivier Gil, Jason Smyth and Michael Vaz - and available to all divisions and teams across Graniterock at no cost.

“The drone acts as our remote eyes,” said Olivier, who received a commercial remote pilot’s license from the Federal Aviation Administration in September. “By implementing this technology, it opens up new ways of doing things and allows us to do remote operations we haven’t done before.”

The greatest advantage drones bring to Graniterock, even more than efficiency in the field, is safer work conditions.

Flying a drone in steep, hard-to-access terrain eliminates risk to Graniterock People. No longer will team members need to hike up a steep slope or climb a stockpile.

Rather than send a team member into a tough spot, the drone can go and bring back information vital to the job.

“One of the main reasons we started looking at drones in the beginning was for the safety benefits,” Michael said.

The GPS team, led by Dan, has worked steadily over the past year to meet the FAA’s commercial requirements. All drone business operators must carry an FAA remote pilot license.

In addition to Olivier, Jason also became a certified UAV pilot, and at the A. R. Wilson Quarry, JP Holcomb is a certified pilot.

Graniterock’s drone is in regular use on projects such as the Highway 35 mudslide in the Santa Cruz Mountains, where it’s dangerously steep and hard for heavy equipment to enter. It’s important project managers know the existing conditions and topography before beginning work and be able to continuously monitor changes throughout the job.

As the Highway 35 work has gotten under way, Caltrans has asked Graniterock for ongoing aerial photography from the drone, recognizing the value the technology brings to the project.

Depending on site topography, an area of land can be measured with a drone in less than one hour, compared with several days when using traditional equipment.

Safety is a major factor when operating a drone as the FAA has rules for all commercial operations.

The Construction GPS team has a rigorous set of safety and risk management protocols it follows for each flight, including a safety plan that is executed and remains in place before, during and after the flight.

Drone are not allowed to be flown over people or streets.

Graniterock has been granted authorization from the FAA to fly over the Company’s materials plants at Berryessa Road and Capitol Avenue in San Jose, which are considered no fly zones due to their proximity to a major airport.

All Graniterock People are encouraged to reach out to the GPS team to find out if this technology could be used in your work.