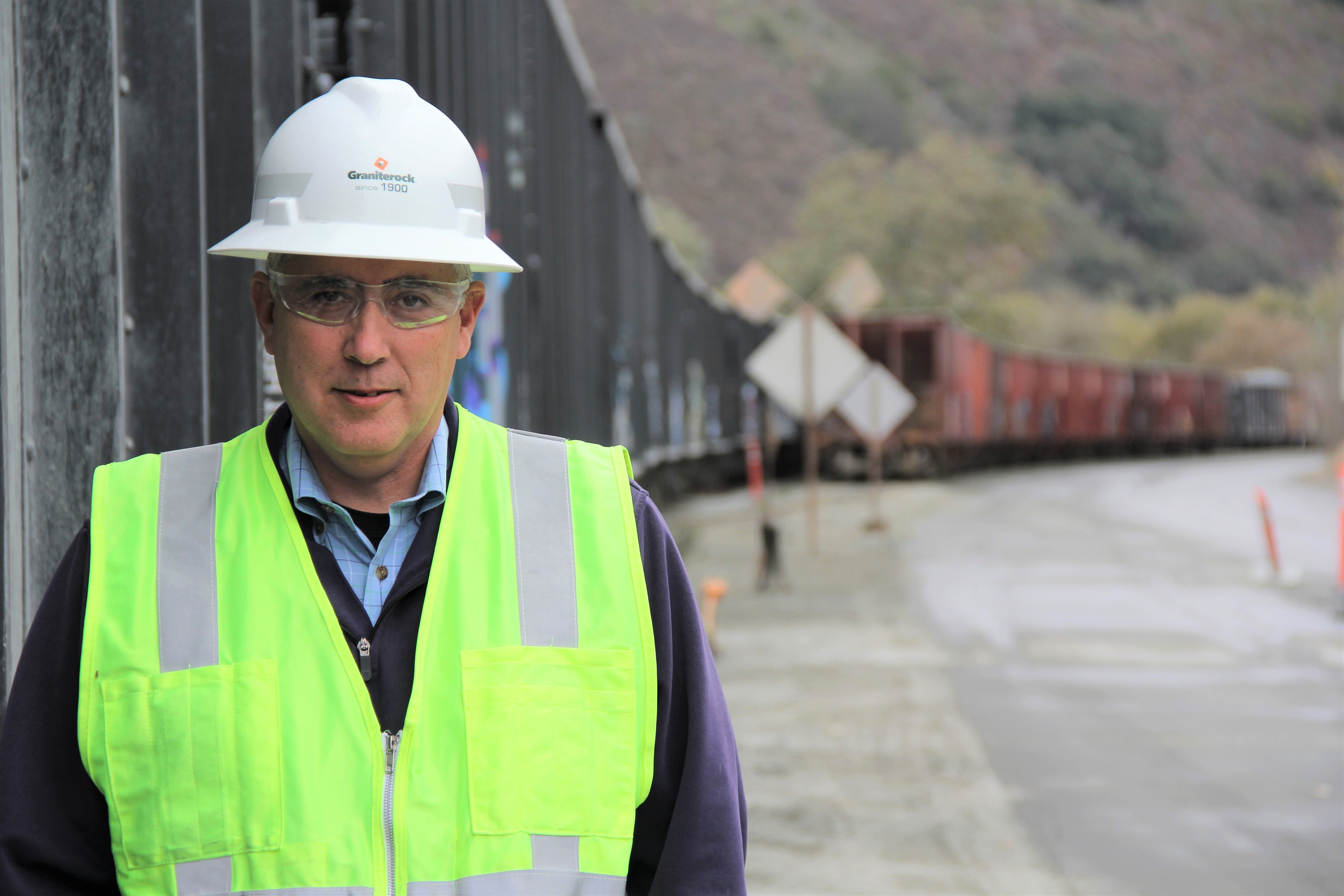 WATSONVILLE – The son of Mexican immigrants who labored in the fields and canneries, Graniterock Executive Vice President Henry Ramirez is sincere when he tells Watsonville High School students, “I’m just like you.”

He feels a connection with migrant children who grow up watching their parents work in agriculture, often serving as translator between English and Spanish to make life in America a little easier for their families.

Henry made the most of his circumstances by embracing education and developing skills that would build a successful career.

It’s a message he enjoys sharing with teens who might doubt their own future.

“My dad had a third-grade education and my mom eighth-grade,” Henry said. “For me, my parents viewed education as very important and insisted I go to good schools. I have my parents to thank for a lot in my life.”

With a work ethic gleaned from his parents, Henry charted an unprecedented path from Graniterock “office boy” in the 1980s to executive vice president in charge of the company’s massive aggregate operations in 2015.

Today he oversees operations and sales at four quarries, including the 2,000-acre A.R. Wilson Quarry, along with Graniterock’s trucking and rail operations.

Roughly 150 team members are under his management.

The upward climb as a Graniterock leader was steady, although not without some unexpected twists, including the tragic death of his wife Heidi in 2012.

“I’ve already had the worst thing happen to me,” said the 53-year-old single dad of three. “Anything else that comes my way is easy.”

As a student at Palma High School in Salinas and Cabrillo College in Aptos, Henry dreamed of going to UC Berkeley because of its history and prestige. Before his acceptance in the late 1980s, Henry had never seen the campus other than in photos.

Henry’s parents were proud their son was on his way to a college degree, however, it was his employer at the time who truly grasped the magnitude of the Berkeley acceptance letter.

While at Cabrillo in 1985, Henry landed a part-time position at Graniterock through a friend’s mother who knew the assistant of the late president Bruce G. Woolpert.

Henry picked up Bruce’s dry cleaning, made bank deposits, took his blue Cadillac to get washed, delivered mail, got film developed and anything else Bruce asked.

He always kept his eyes open to other opportunities at the company that could bolster his college savings, and often agreed to fill in for the weighmaster at Graniterock’s asphalt plant in South San Francisco.

Henry left Graniterock to study political science at Berkeley, not anticipating he’d be back after graduation.

The Operating Engineers union in San Francisco offered to turn his college internship into a full-time job. However, after Henry shared the news with the late Bruce W. Woolpert, a generous offer from Graniterock arrived in the mail a few days later.

Without a dollar to his name, not even a car, Graniterock’s offer to work as a technician for the construction materials research and testing team – with a company truck – was too good to turn down.

Little did he know in 1989, that was the start of a long construction career and he would fall in love with the heavy operations of aggregate mining.

In April 1998 he was tapped to manage the Aromas asphalt plant.

Henry’s time running the plant saw record production as Salinas was experiencing a building boom and asphalt paving was in high demand.

Downplaying the accomplishment in his soft-spoken manner, he notes mix designs and quality control were different than they are today.

By 2004, Henry was known as a proven problem solver and expert in aggregate and asphalt operations as well as the company’s transportation services, which include its own rail cars and trucks for hauling materials.

And he had developed strong relationships with people throughout the company he could collaborate with.

Henry had a lot of great mentors along the way, including Graniterock veterans Bill Goodson, Bill Damm and Jack Leemaster, who taught Henry how to best manage and operate plants.

These experiences made him perfectly suited for taking over management of the Wilson Quarry – the centerpiece of all Graniterock materials.

“Everything I learned along the way equipped me with the tools to safely handle any crisis that may come my way,” Henry said. “I figured out you’ve got to do whatever is takes as long as it’s safe to keep a plant running and get production out. Graniterock has the people, the equipment and the knowledge to solve any problem. If you’ve got those three, you can figure out any challenge.”

While the career path would eventually lead to joining Graniterock’s executive team in 2015, he hit a major bump when Heidi, the love of his life, lost her fight with cancer.

Married nearly 12 years, her passing left Henry a single dad of three young children and completely upended his view on what it means to strike a work-life balance.

He spends every minute outside of work juggling the needs of his 15-year-old daughter Paloma and 9-year-old twins Hugh and Georgina.

You’re likely to find him in the bleachers watching Paloma play varsity basketball for the Monte Vista Christian Mustangs and her travel ball team.

He’s also there for all of the twins’ school events and extracurricular activities.

Still, the hardest part of raising his kids alone might be when they ask about not having a mom.

It was tempting to hang up his career after Heidi’s passing, but the Graniterock culture and the teams he’s been fortunate to be part of for three decades keep Henry inspired to continue working and doing what’s best for his family and the company.

“Loyalty is a two-way street,” Henry said. “It’s not one way, it’s definitely both ways.”