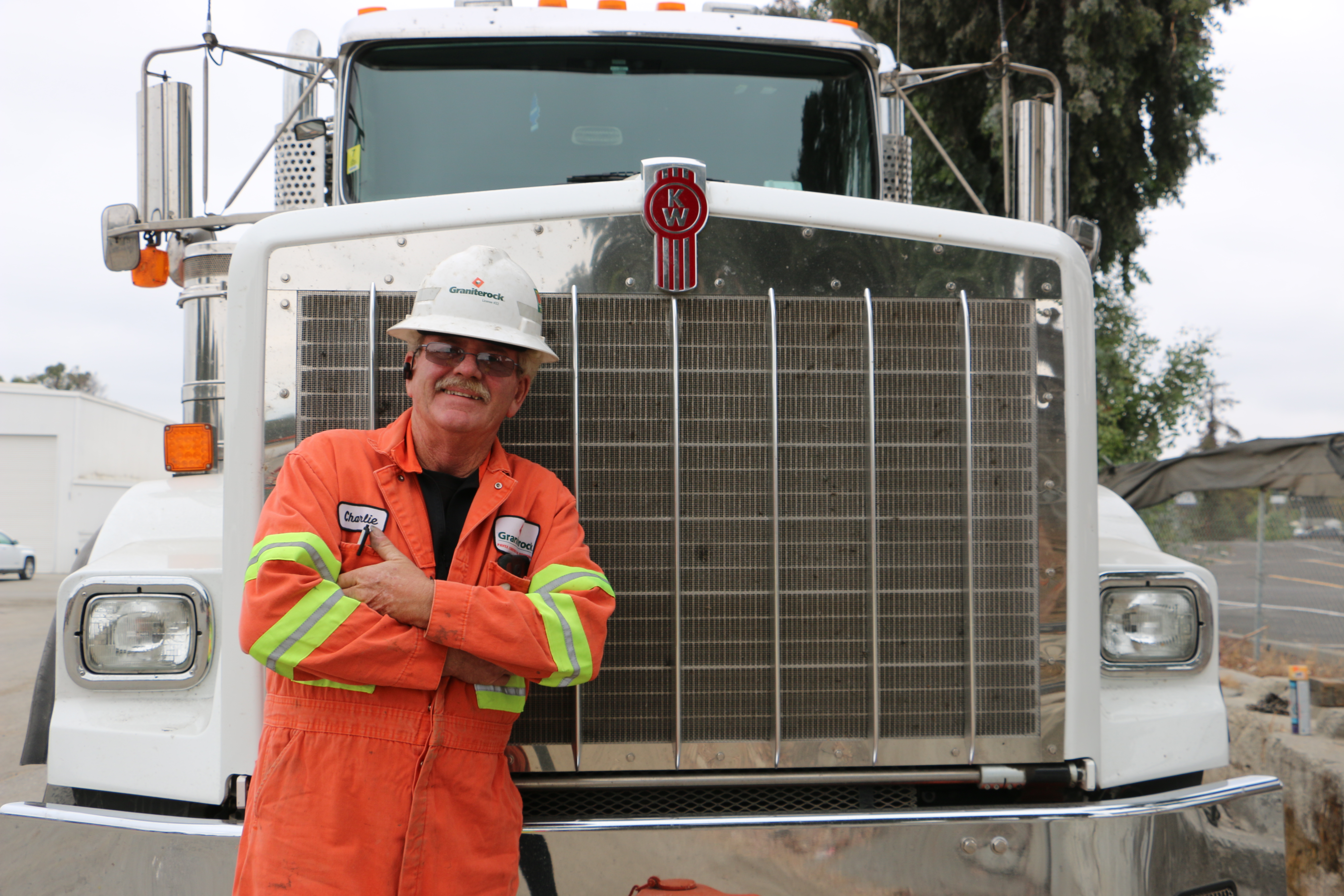 Charlie Corwell on the road again and again

He drives a 60-foot-long low boy loaded with heavy construction equipment from job site to job site all over Northern and Central California.

Charlie’s day begins when it’s still dark, dropping off the first piece by 7 a.m. before any crew members show up.

His destinations could be anywhere from the East Bay to the Santa Cruz Mountains, Big Sur and all points in between.

After the first drop, it’s a continuous run of pick-ups and deliveries, behind the wheel in his 18-speed Kenworth T800, of just about any piece of yellow iron you can name – excavators, rollers, dozers, pavers and grinders.

A lot of times the load is extra-wide such as when he’s pulling an excavator or backhoe.

“I haul a lot of serious equipment that sometimes weighs so much it requires a special permit,” Charlie said. “Nobody really wants to do this job. It’s a lot of hard work and it’s usually six days a week.”

Charlie, 62, arrived at Graniterock in 1979 and drove an oil spreader truck for many years before changing over to construction equipment.

In all his years on the road, which he estimates adds up to two million miles, Charlie’s stayed focused on safety and is said to have the skills and dedication of a professional truck driver that can’t really be taught.

“He’s focused 110 percent of the time,” said Elden Davis, Graniterock’s maintenance manager. “With what Charlie does, you have to be on your game, especially around here in this traffic. Charlie stays focused and doesn’t get sidetracked.”

While there’s often a sense of immediacy in getting equipment to the job or picking up a broken piece, Charlie can’t let the urgency distract his driving or cause him to cut corners.

He’s always on the defense with other drivers.

“Up here in the cab, you’re looking at traffic as far ahead of you as you can see,” Charlie said. “You’re watching people coming up behind you and you’ve got to be aware of the idiot cutting in and out of traffic. When you carry this much weight, you can’t stop or slow down quickly.”

Charlie, a Teamster member for 44 years, would ride in his father’s cab as a child and thought it was a natural fit to follow his lead into trucking.

He drove for Pacific Pavements prior Graniterock.

Charlie, with his trademark mustache and orange coveralls, has a fun, easy-going side that makes him pleasant to work with.

The South San Francisco resident is a family guy who enjoys time with Derna, his wife of 37 years, their three daughters, spouses and two grandchildren.

And, sometimes he’ll hit the road on his Harley.