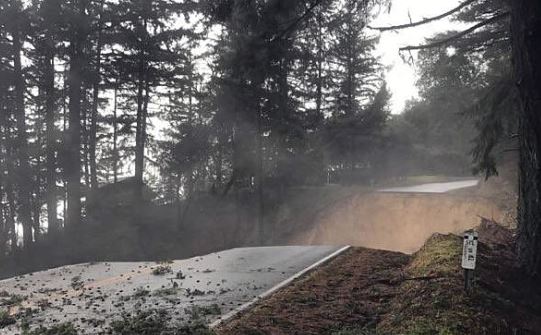 While heavy rain finally arrived to end California’s years-long drought, so too did an unexpected thrashing of the state’s infrastructure.The wettest storm season we’ve seen in years, drought-busting by all definitions, left a wake of destruction to highways, roads and bridges estimated to top $1 billion statewide.

From the Oroville Dam to Big Sur and beyond, mudslides, flooding, erosion and other rain-related problems have taken their toll.

State leaders will grapple for years with how to pay for the emergency road repairs on top of existing unfunded backlogs.

In addition to the latest damage, California is struggling with a $6 billion annual backlog of repairs for roads, highways and bridges that leaders can't agree on a way to fund.

Gov. Jerry Brown declared a state of emergency in January to help clear the way for federal funding to repair and rebuild highways and other infrastructure hammered by the rain.

Brown recently took steps toward addressing the infrastructure crisis by supporting SB 1, a bill that would raise $52 billion over 10 years to fix the state's roads through a big gasoline tax increase, higher car registration fees and a charge on emission-free vehicles.

"Yes, it costs money. And if the roof in your house is leaking, you better fix it, because it gets worse all the time," Brown said last week at a Capitol news conference. "This is mostly about fixing what we already have. If for some reason people try to fight this, and God help us if they were successful, they won't defeat this, they'll just delay it and make the expenses go up."

The proposal aims to address a $59 billion backlog in deferred maintenance on state highways and $78 billion on local streets and roads.

If the winter of 2017 taught us anything, it’s that investment in maintaining California’s roads and highways is more critical than ever.

Snapshot of storm damage around Northern and Central California:

Total rainfall - Parts of California have received approximately 34 inches of rain since January.

California reservoirs have water levels at or above historic levels.

Storms wrecked 350 roads statewide, closing traffic on at least 35 that await rebuilding or shoring up.

Most expensive highway damage – Highway 37 in Marin County is estimated to cost $11.5 million to fix flooding damage. The collapse of Highway 1 near Muir Beach, also in Marin County, is a close second at $10.4 million in damages.

Highway 35 (Skyline Boulevard), Santa Cruz County – Gaping hole left in section of road completely washed away near Las Cubres Road. No estimate on when it might be repaired.