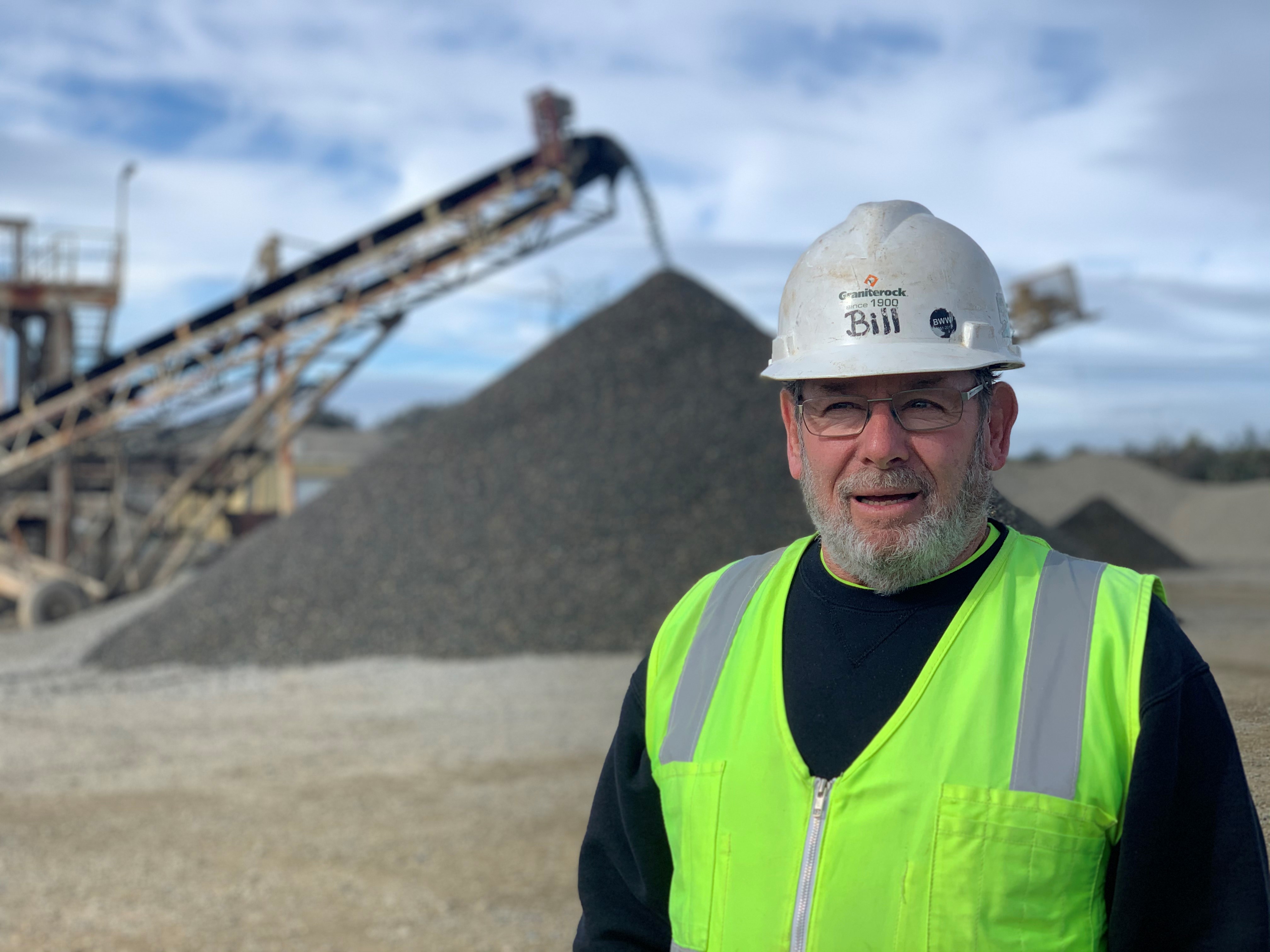 HOLLISTER – According to the U.S. Bureau of Labor Statistics, the average U.S. worker stays with a company about four years before moving on.Bill Damm, who oversees Graniterock’s sand and gravel production in San Benito County, has crushed that statistic 10 times over and is still going strong.

Entering his 41st year at Graniterock, Bill has the energy and drive to help bridge the gap between new people joining the company and experienced veterans such as himself who can share well-honed insight about the construction industry and company.

“Graniterock offers a culture for its workforce you won’t find many other places” Bill said. “Anybody who can get in here can go anywhere in the company and achieve anything.”

In four decades, Bill has seen every part of the business and is a reliable expert in construction aggregates. He spent 25 years at Graniterock’s research and testing laboratory, where he became an authority on production and data analysis.

Bill and the five-person crew who mine a small quarry four miles southeast of Hollister along Tres Pinos Creek play an important role in Graniterock’s construction materials operations, providing aggregates for concrete plants scattered from Redwood City to Salinas, as well as supplying aggregates to other materials producers in the region.

The site was first mined by Graniterock in 1991 for sand and the popular pea gravel.

What Bill’s most proud of in all his time is the stellar safety record his team has accomplished in recent years.

They have had eight consecutive MSHA inspections without a single violation.

It’s a bragging right Bill takes no credit for.

“I’m the most proud of our safety record and I have the least to do with it,” Bill explained. “The people here know what the rules are and how to correct anything that’s not right. When they see a hazard, they shut down and fix it. They don’t need my permission to do what’s safe.”

A long career at Graniterock might have been in the cards for Bill all along.

Born and raised in Hollister, he enlisted in the U.S. Navy after graduating from San Benito High School.

He left active service in 1966 and returned to the area, working at Ideal Cement Company in San Juan Bautista until the plant was shuttered in 1971.

Bill’s job was moved to Knoxville, Tenn., which never felt quite like home for Bill and his wife Mary – high school sweethearts who married 53 years ago.

They left Tennessee after less than two years and beelined it back to San Benito County, where they’ve now settled on 20 acres with their daughter, two sons and five grandchildren.

Bill’s future was sealed when his friend and former Ideal Cement colleague, Val Verutti, showed up at his door and said, “There’s a job for you at Graniterock.”

We could say the rest was history, but his Graniterock story only began after the three-and-half-hour interview with Betsy in 1979.

Bill joined Val in the lab, where he was happy studying aggregates and creating charts to analyze gradations and production rates.

He created data for Graniterock to act on before computers were standard and automation and business intelligence came on scene.

Bill took over management of the Hollister mining operation in 2004.

“Bill is methodical and detailed in his analysis,” said Henry Ramirez, Graniterock executive vice president. “He’s always been good at what he does. Bill has also been blessed with a great crew that is like family.”

While retirement is likely on the horizon, Bill enjoys coming to work and supporting the team, and can’t say when his last day will be.

If he’s not at work, Bill is probably somewhere at sea with Mary as the two are enthusiastic travelers who prefer vacationing on cruise ships.

“I’ve spent 192 days on a ship,” he said, pulling out the plastic cruise cards to prove it. “We just love it.”