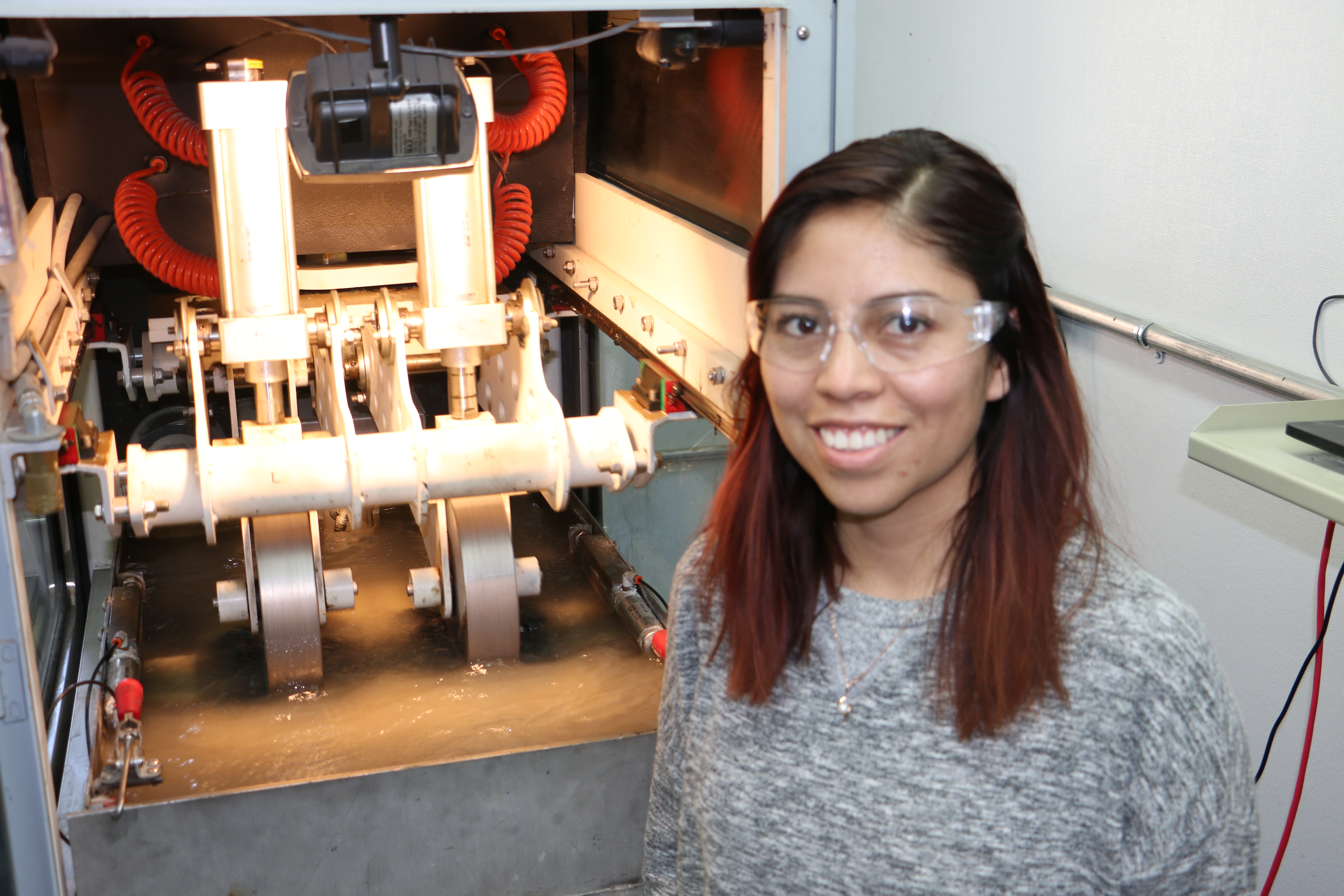 A road materials construction career started at the beauty counter

AROMAS – Asphalt binders, gradation graphs and air voids seem a world away from her mother’s bathroom counter in Western Mexico, dotted with pretty jars of creams and perfumes that cast a spell on Elvira Paniagua at a young age and would inevitably define her future.

“I always liked to mix stuff and see what it would do,” Elvira, 26, said of her attraction to science, particularly chemistry. “I played a lot with my mom’s shampoos and lotions to see if I could make something new out of mixing them together. She never got upset and let me explore.”

That early exploration of her mom’s beauty products while growing up in the state of Michoacan was the seed that helped blossom a love of chemistry for Elvira as an honors student at Watsonville High School and ambition to pursue a chemistry degree from UC Merced.

Elvira’s parents moved their four children to Watsonville when she was 8 and spoke no English.

While her mom and dad worked in the agriculture fields picking strawberries, Elvira and her two sisters and brother attended school and went down the path to U.S. citizenship.

Like most parents who migrate across the border, Elvira’s wanted their children to have better choices for their future than they had in Mexico.

Elvira said she had attentive teachers who spent extra time to get her caught up on English, and figured out pretty quickly math and science were her strong subjects.

“Math and science were so clear for me,” she said. “I was always asking my high school science teacher for side projects and spent my lunchtime in the lab so I could learn the equipment better.”

Her academic achievements allowed Elvira to become the first in her family to graduate with a bachelor’s degree, which she says has inspired her nieces and nephews to do the same.

Ultimately, Elvira’s science aptitude led to Graniterock’s research and testing laboratory in Aromas, where she feels at home putting the company’s hot mix asphalt through a battery of tests – LA rattler, specific gravity, Hveem, Marshall and Gyratory compaction – to analyze whether a particular paving mix meets the project’s specifications.

Her role as a Graniterock materials testing engineer is vitally important to the integrity and performance of the company’s road-building materials, which are used throughout Northern California.

“Elvira has the ability to fill a variety of different roles such as communicating and solving problems, designing Tableau reports and testing our materials with integrity and accuracy,” said Toni Carroll, Graniterock’s quality director. “She has a great attitude and comes to work with a lot of great improvement ideas.”

The lab resembles an industrial kitchen, where a sample of asphalt comes out of a 300-degree oven on a cookie sheet, gets dumped onto a stainless steel counter where it’s diced into smaller batches and put into other machines that can do things such as measure binder content, replicate compaction and analyze overall performance.

Elvira moves through each step with efficiency and precision, and despite not having a background in construction, knows exactly what she’s looking for in each mix design, whether it’s rut-resistance, wear-resistance, aggregate type or temperature performance.

Her analysis can identify issues that originate at the hot plant or the aggregate stockpile.

“We’re always looking at the science behind our materials and how we can make improvements,” Elvira said. “This job suits me well because I have a lot of curiosity and want to see things up close.”

Outside the lab, Elvira spends time with her boyfriend Derek and watches Korean television dramas.