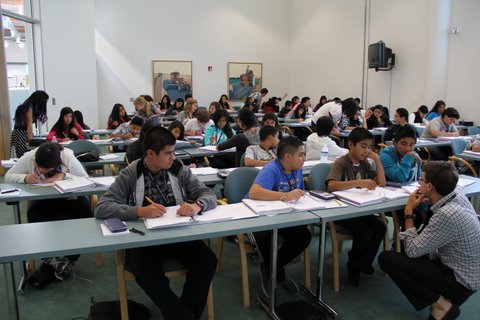 WATSONVILLE – Most teenagers grumble and protest if you try to pull them away from Pokemon Go or other video games, especially during summer break.

But a group of more than 100 incoming eighth-graders from Santa Cruz, San Benito and Monterey county middle schools voluntarily agreed to give up one week of summer to attend the 7th annual Bruce W. Woolpert Algebra Academy Aug. 8-12 at Graniterock’s corporate office in Watsonville.

The academy runs 9 a.m.-4 p.m., with graduation scheduled Aug. 13 at E.A. Hall Middle School in Watsonville. A field trip to CSU Monterey Bay is planned for the students Aug. 10.

The academy, which serves as an algebra immersion camp to provide students a solid math foundation, is taught by professors from UC Santa Cruz (led by Nandini Bhattacharya) and CSU Monterey Bay (led by Hongde Hu). In addition, several Graniterock employees from throughout the company speak to the students each morning about how they use algebra and other math concepts in their daily work.

In a testament to how the academy has helped young people hone their math skills and develop a true love of the subject, five academy graduates are returning to help with this summer’s program.

“The students who complete the Bruce W. Woolpert Algebra Academy leave the program with sharper skills and a desire to excel at math in school,” Graniterock Vice President Kevin Jeffery said. “As a local, family-owned business, we’re committed to providing educational and future career opportunities for the youth in our region.”

The academy has seen many successes since its creation in 2010, including a number of alumni taking advantage of CSU Monterey Bay’s guarantee of admission to all academy graduates who meet minimum CSU standards.

The Algebra Academy was started in 2010 by Graniterock’s former President and CEO Bruce W. Woolpert and current Vice President Kevin Jeffery, both of whom were passionate about the education of local students. They believed in the importance of students having a strong foundation in mathematics. Woolpert and Jeffery invited CSUMB Math Department Chair Hu to work with students at Watsonville’s Rolling Hills Middle School for the first Algebra Academy, and the program has grown in interest and impact from those beginnings almost seven years ago.