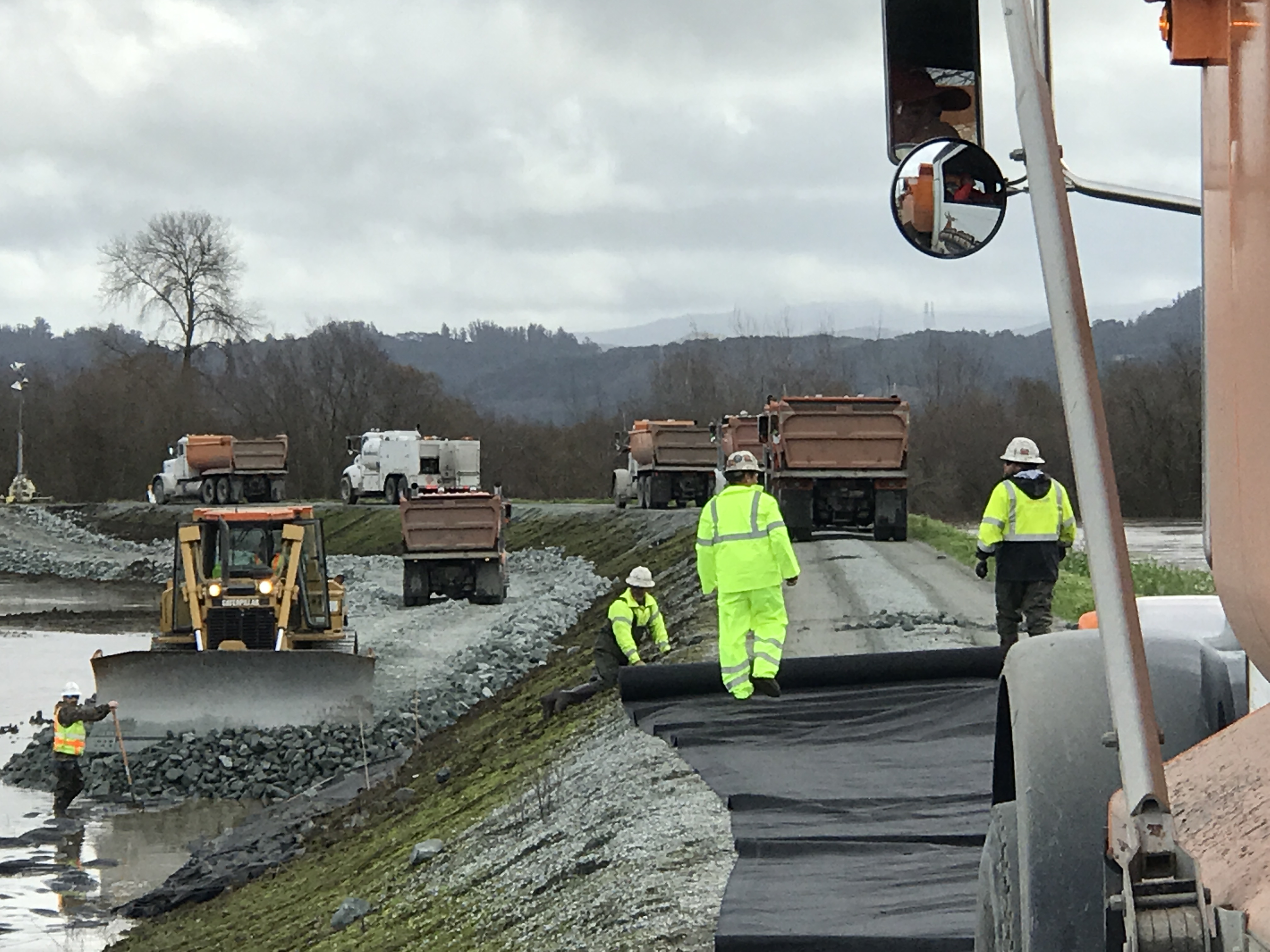 WATSONVILLE - In a matter of a couple of hours, Graniterock People from across all divisions pulled together to prevent catastrophic flooding along the Pajaro River during last week’s torrential downpour.

A One Company effort was quickly mobilized to deliver and install filter fabric and nearly 6,000 tons of rock – base rock and gabion, 15 tons at a time - to help the Santa Cruz County Public Works Department get a handle on small leaks in the levee brought on by the heavy rain.

From the A. R. Wilson Quarry to Building Materials and the Construction Division, Graniterock People worked seamlessly.

“The key to this emergency work was applying the Working Together concepts and addressing the critical issues of how Graniterock could best use its assets and resources to help the county,” Don Barrett said. “Everybody did the right thing and we were able to further build the relationship and confidence the county has in us.”

Santa Cruz County leaders contacted Graniterock the afternoon of Jan. 10 to ask the Company to fix the small leaks - known as boils, which look like boiling water - before they became big holes and undermined the levee, causing major damage to the surrounding fields and homes.

Don, along with Chago Ramirez and Tom Treanor, met with county representatives at the levee within minutes of the call to determine how much material and trucks would be needed to execute the plan.

They were simultaneously communicating with Gary Whitmire, who was the on-site manager directing the work, to get equipment and Construction Division crews to the site.

The work needed to start as soon as possible.

One critical issue was finding enough filter fabric in a short amount of time.

Mark Treanor found several rolls in the Building Materials inventory and offered to drive them to the levee.

However, Gary contacted HD Supply White Cap in Watsonville and they were willing to stay open extra late to supply Graniterock with the necessary fabric.

Work started before the sun went down Jan. 10 and crews continued through the night, installing fabric and dumping rock next to the levee in howling wind and rain.

Safety was the critical issue with truck traffic on and off the narrow, wet levee, especially at night.

Trucks had to back up 1,700 feet on the narrow road created to dump their loads.

Chris Perez did an outstanding job keeping the area safe for truckers and crews during the night operation.

Chago and Denny Mahler did a great job coordinating the trucks and creating a safe staging area.

“It took an amazing amount of cooperation to get this done,” Gary said. “Everyone did an outstanding, conscientious, safe job.”