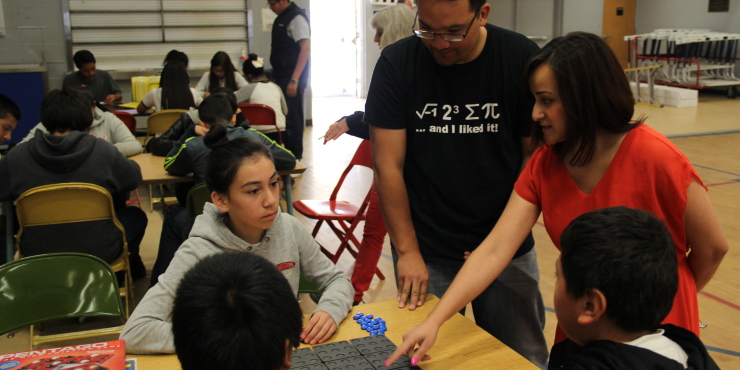 Inspiring teens with a little sweetness on Pi Day

SANTA CRUZ >> The number Pi—expressed as 3.142 for practical purposes — is the circumference of a circle divided by its diameter. It is a famously mysterious number because its exact value cannot be determined; no matter how many digits you calculate it to, the number never ends.

So when dozens of students gathered in the gymnasium at Rolling Hills Middle School in Watsonville Monday afternoon — March 14 — for the third annual Pi Day Math Festival they were plenty exited about the prospect of winning pie provided by the bakery for a raffle.

Over the course of the day, about 500 sixth-, seventh- and eighth-grade students rotated into the gym to participate in a variety of games aimed at inspiring kids to embrace mathematics and maybe even consider going into a profession that requires its practice.

“This is just one small way we can encourage kids to try their best at math,” said Gayle’s Bakery owner Gayle Ortiz. “We know people work a little harder when they have a reward to look forward to.”

There are about 35 students from the school who are members of the Bruce W. Woolpert Algebra Academy, sponsored by Graniterock construction. Those students, who meet during the summer to learn more in-depth mathematics, take on a leadership role during the festival by organizing and hosting game tables, said Kevin Jeffery, Vice President for Graniterock and an original founder of the algebra academy seven years ago alongside the late Bruce Woolpert, former CEO of Graniterock.

Seven schools participate in the algebra academy, though Rolling Hills Middle School was where it all began, he said.

“One of the overarching missions of this academy is to change the culture at these local middle schools so that math is cool,” Jeffery said. “We want kids to get excited about studying and learning mathematics.”

Jeffery said part of his passion for helping kids become interested in math is the future of the construction industry, and other professions that require mathematical comprehension.

“What we as a company (Graniterock) are facing is a workforce shortage crisis,” he said. “We look out, 10, 20 years in the future, and the folks who are running our construction crews or doing our engineering are getting older and retiring. So one side benefit is we can get these kids excited and possibly interested in how math is used in construction. I tell all these kids when they join us at the algebra academy, ‘I want you to have a great week, and when you’re done with college, I want to hire you.”

The games at the gym all required some variation of memory recall, simple arithmetic, pattern recognition, or critical thinking.

Caitlan Paat, a 14-year-old eighth-grader who is a member of the Bruce W. Woolpert Algebra Academy, hosted a table playing a card game called “7,8,9.”

“The game uses fast arithmetic and I think it makes learning more fun for kids,” she said. “I enjoy the math but what I really like is working with the younger kids. It’s all fun.”