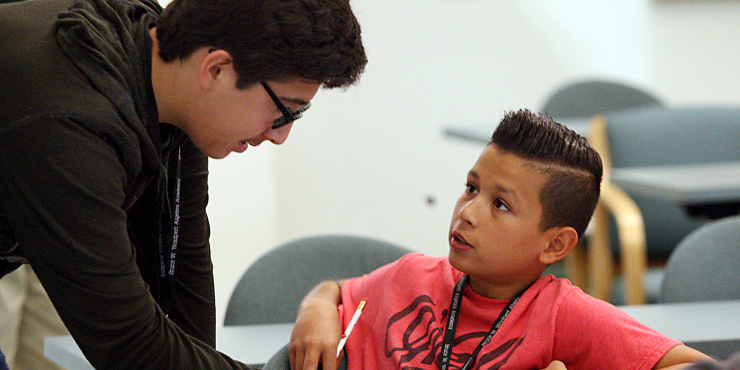 WATSONVILLE >> If algebra is the gateway to a career in mathematics, students at the 7th annual Bruce W. Woolpert Algebra Academy appeared hooked for life.

Hu discovered a love for mathematics as an 11-year-old student in China’s Jiangxi Province. As an adult, math has propelled him around the world. After receiving his doctorate from McGill University in 1992, he became a sought-after Stanford University researcher, frequently presenting his work internationally.

“Math totally changed my life. You learn the fundamentals of algebra and build on it. Once you understand the math, you apply it in any field. At Stanford, my work focused on logic, finance and computer science, but the potential is limitless,” said Hu. “Once you know math, you can do anything.”

In 1999, Hu turned his attention to education, becoming a member of fledgling CSUMB’s faculty where he created both a minor and a major in the field.

Yet students do not receive a solid foundation in algebra earlier enough in their academic careers, according to Hu.

So when the late-Graniterock President and CEO Bruce Woolpert and corporate counsel Kevin Jeffrey invited Hu to collaborate on an algebra immersion program for middle school students seven years ago, he jumped at the chance.

Today, the academy has launched numerous college careers; and for the first time this year, five academy graduates have returned to help with this summer’s program.

Ullises Cervantes, 15, of Watsonville High graduated from the Algebra Academy three years ago and said the experience prepared him for eighth grade.

“I recognized the math and was able to pick it up quickly,” said Cervantes. “So I was able to take more advanced math when I entered high school.”

Cervantes said he volunteered as a tutor at this year’s Algebra Academy because he wanted to give back.

Cheylee Eaton, 13, of Aromas School, said she enjoys the fun aspects of the academy including the games and socializing. but her goal is serious.

“I want to study math at Stanford,” she said.