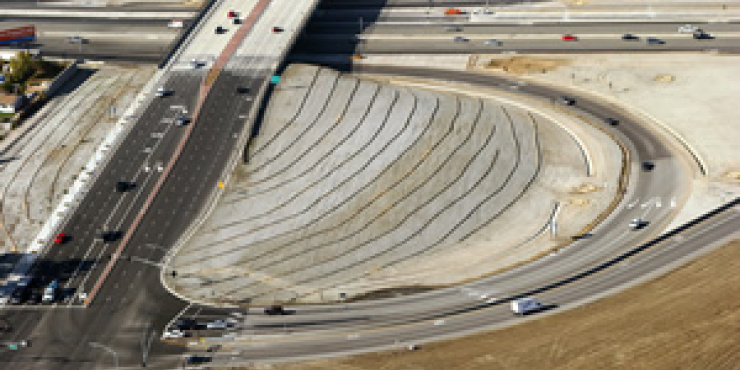 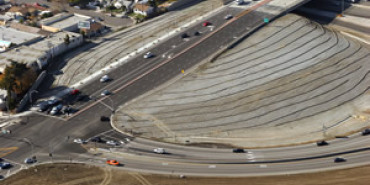 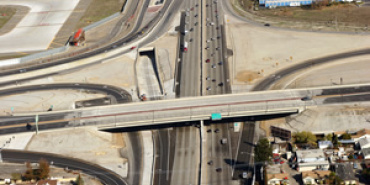 
While Silicon Valley high-tech firms like Google, Yahoo and Cisco Systems have been busy paving the information superhighway, the economic and population growth of the region have created great challenges and opportunities for construction firms that do the important work of building the real highways of the area.

While construction partner FCI built the structures, Watsonville-based Graniterock attacked the grading and paving portions of two major public works projects that have helped keep Silicon Valley moving. Because of the size and complexity of the recently completed jobs, the work tested the creativity and skills of Graniterock’s project managers and crews. Performed by Pavex, Graniterock’s construction division, the projects mark milestones for a company that had been an important player in building California’s roads and highways since 1900.

Pavex’s parent company is Graniterock, a company that holds California contractor’s license #22 and constructed such projects as Main Street in Watsonville, paved the streets of Santa Cruz and built the road from the Wawona Lodge to Badger Pass in Yosemite National Park. Arthur R. Wilson, Graniterock’s founder and grandfather of company president and CEO Bruce Woolpert, founded Granite Construction Company in 1922. In 1936 the two companies split when Wilson’s widow sold Granite Construction.

880/Coleman
When it came time to expand San Jose’s aging Mineta International Airport, increasing the capacity and efficiency of the freeway interchange linking the airport to downtown San Jose was a key part of the project. Just as the airport needed to expand to service the needs of the area’s surging economy and growing population, the roads that carried passengers to and from the airport were showing their age.

The old interchange, which served as the gateway between the airport and downtown San Jose, did not meet current design standards, nor did it adequately accommodate traffic demand that would be generated by the airport’s expansion and other planned development in the vicinity. The $81 million project reconfigured and widened existing ramps on the Interstate 880/Coleman Avenue interchange, added a new direct connector underpass from Airport Boulevard to southbound I-880, replaced the Coleman Avenue over-crossing at Interstate 880, and widened a section of Coleman Avenue from four to six lanes.

While they were preparing their bid for the Santa Clara Valley Transportation Authority (VTA), the FCI/Pavex joint venture realized the tight schedule and multiple projects would have required extensive overtime and a seven-day-a-week schedule, making the project considerably more expensive for the owner. The contractors applied some Silicon Valley ingenuity of their own to solve the problem.

Instead of submitting the costly bid, the contractors came up with a solution based on “value engineering.” The original plans called for the construction of an underpass that fed traffic from the airport onto the freeway. By reworking the design, the contractors came up with a plan to build the “roof” of the underpass first, thereby allowing road construction over it to occur sooner rather than later. The result was a critical path that allowed other paving projects to move forward in more expeditious manner.

“Value engineering is what got us the job,” said Chris Anderson, Pavex superintendent for the project.

But once work started, the challenges continued. The project required building in the middle of a congested, heavily traveled traffic corridor in the heart of Silicon Valley immediately adjacent to operating runways of the airport. As such, managing traffic flow and building a series of eight detours became a major challenge. In addition, the tight schedule, three-dimensional design of the project put project managers to the test. Falling behind would have had a domino effect on the rest of the project and thrown everything else off schedule. The builders had to get it right the first time.

“You didn’t have a second chance,” said Anderson. “It was a thinking man’s job.”

Anderson, who just joined Graniterock Pavex in 2003, thrives on the diversity of work that Pavex performs and says he valued the company’s trust in him to oversee a major project like the 880/Coleman interchange.

By the time the new interchange project wrapped up in November 2006, Pavex had moved 235,257 cubic yards of dirt, built a new over-crossing bridge and tunnel as well as paved 55,868 tons of asphalt concrete, relieving a major bottleneck from this key Silicon Valley transportation corridor.

85/101
Several miles away in the city of Mountain View, a tech hub of its own that is home to Netscape and the NASA Ames Research Center, Pavex and joint venture partner FCI engaged in an even bigger VTA project that posed challenges of a different kind. Addressing the issues that arose required project managers to bring a particularly creative approach to problem solving.

Over 170,000 vehicles per day drive along U.S. 101 past the Highway 85 interchange, with another 30,000 merging from 85 on to 101. The complex design called for squeezing five new bridges and reconfiguring four interchanges in less than a one-mile stretch of roadway. Each of the five new bridges and four reconfigured interchanges opened in phases to help with construction staging and to offer small doses of congestion relief to commuters throughout more than three years of construction.

The $125 million project featured an enhanced interchange of Highways 101 and 85 with additional lanes, dedicated new off-ramps and freeway-to-freeway carpool ramps, reconfigured Highway 101 ramps and a reconstructed exit ramp that kept local motorists from having to mix with freeway traffic and providing safer merges and exclusive lanes for carpoolers.

Pavex and FCI had to work through four rainy seasons and incurred 160 rain delays which included working through one of the wettest winters on record. Particularly challenging was widening Highway 101 bridges over Stevens Creek during short summer windows to comply with U.S. Fish and Wildlife Service requirements while maintaining bicyclist and pedestrian access to Stevens Creek Trail with as little disruption as possible.

Construction began during a downturn in the region’s economy, making margins low and yet finished during a boom when the cost of labor and materials was high. For example, trucking rates went from $69 an hour at the time of bid to $90 an hour at the end of the project.

“We were always against the clock on this project,” said Alec Ching, Pavex’s business manager who served as project manager and project engineer on the project. “Time in every aspect of this project was money.”

And like any public roadway project of this size, building in the middle of a major traffic corridor required the construction of several major detours to accommodate traffic through the project area.

But the most challenging aspect of the job turned out to be the number of changes necessary to construct the project as the contract documents did not anticipate some the complexities of handling traffic, stage construction, or planned improvements that were in conflict with the aged existing infrastructure. More than 300 change orders and more than 600 requests for information (RFIs) were produced addressing the changes.

As a result, Pavex, FCI and the VTA created problem resolution and team building processes that squarely addressed defects in the plans before they could derail the project. Both sides met in the middle and reached a global settlement to address deficiencies in the plans, creating a spirit of cooperation that reflected well on the contractors and the owner.

“That was unique on this project,” said Ching. “Both sides had to pony up and come to the table.”

Ching said in addition to learning volumes about public works construction and design review on the job, he gained valuable skills in negotiations and creative thinking.

“There’s always another way to skin a cat,” he said. “We had to be creative to successfully complete this project.”

By the time the last Pavex crews wrapped up the project in November 2006, the two contractors had worked through 10 construction phases, demolished two bridges and built five, increased the number of traffic lanes from eight to 14, and built five new intersections in just a half-mile area.

“The Pavex team has done an exceptional job developing a culture that is consistent with Graniterock’s culture and belief in people that have earned the company a place on the ‘Best Places to Work’ list every year that the list has been published,” said Woolpert, Graniterock’s president and CEO. “Responsibility for doing a good job, starting with our project managers, is held by all members of the Pavex team. We could always use a few really exceptional Project Managers who have outstanding people and technical skills.”

As the Bay Area undergoes a transformation from resumption of the high technology boom to include nanotechnology and biogenetic medicine, Pavex continues to use its innovation and know-how to pave its way into the region’s future.

“I think the market here is going to be outstanding for a decade and that’s really exciting,” said Rodney Jenny, Pavex division manager. “Like many Silicon Valley high tech firms, Pavex has grown from a start-up company to one of the region’s major heavy civil constructions companies and looks forward to steady growth.”