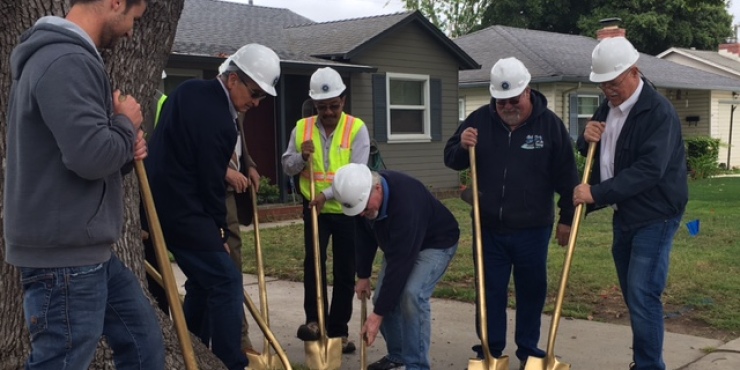 Article from the Salinas Californianabout Graniterock's working with the Salinas Public Works Department to fix sidewalks with Measure G funds.

The city’s most troubled sidewalks are getting a makeover.

Starting Monday construction workers will begin tackling the most worn, torn and cracked sidewalks in Salinas.

The citywide project starts with the sidewalks on Loma Drive and Dororo Drive, which will involve uprooting some trees. Public Works Director Gary Petersen said the trees will be replaced. The $150,000 project is expected to be completed in four weeks.

Priority will be given to the worst sidewalks.

Petersen said that the city’s sidewalks have long been in need of repair. The city has a 14-year backlog of sidewalks that need repair, but funding has been a challenge through the years. The project is being funded by Measure G.

Tom Squeri, CEO of Granitenite based in Watsonville, said he is seeing more cities and counties move toward job order contracts including Monterey and Watsonville.

“It’s really an efficient way for cities and counties to get the work done. They still get the low bid price, but they don’t have to go through all bureaucracy of the full public bid process,” said Squeri.

“We can get crews working faster,” Petersen said.

Of the sidewalk project Petersen said, “We are trying to get as much sidewalk done in a single area as we can at one time. We will be working vigorously throughout the city for the next six months and then return for more funding.”