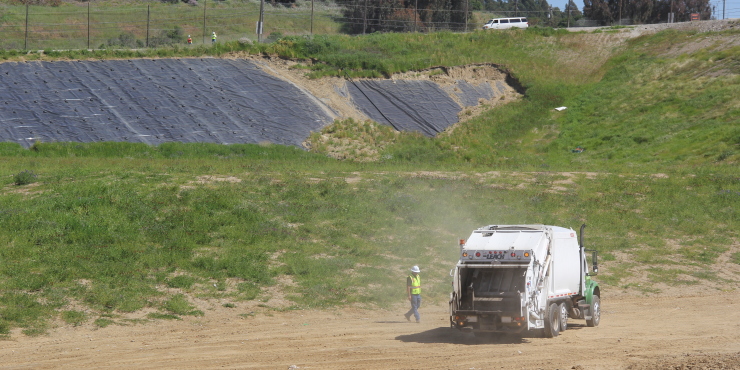 WATSONVILLE >> If not for the recession slamming Santa Cruz County, the Buena Vista landfill might have been full by now, with trash being trucked to a more distant location at a higher cost to taxpayers.

Instead, county officials Tuesday celebrated the opening of the last section of the landfill, a 7-acre area estimated to last 15 to 20 years.

The new section built by Granite Rock Co. cost $5.8 million, took almost a year to complete and won an employee recognition award for Carisa Duran of the Public Works staff who managed the project from summer 2014 to summer 2015.

The bonds funding the project will be repaid in 20 years.

The global firm Geosyntec designed the now invisible underground layer that had to pass muster with state regulators to protect water supplies from contamination.

John Presleigh, who heads the Public Works Department, thanked Steve Palmisano, his counterpart in Watsonville, for letting the county use Watsonville’s landfill on San Andreas Road while the county site was prepared, saving the county more than $1 million in hauling expenses.

Over the next year, the county will return the favor by accepting the same amount of tonnage from Watsonville.

The county began looking for another landfill site in 2001 when it appeared the Buena Vista site would be full before 2016, but that effort was abandoned when none of the identified sites found favor with the public.

Bruce McPherson, who chairs the county Board of Supervisors, marveled at how the life of the landfill threatened with closure has been extended despite an increase in population and the strictest environmental regulations.

“I remember writing editorials about it in the 1980s,” he said, crediting forward-thinking county employees with the turnaround.

Recycling became mandatory for businesses in the 1990s, two decades before a state mandate took effect, and a ban on polystyrene to-go containers was adopted in 2008 before the recession hit.

Most of the trash in the landfill is household refuse, according to Kasey Kolassa, who heads the solid waste division of the Public Works Department.

“The economy plays a role,” he said. “We saw a drop in tonnage.”

By emphasizing recycling, the county diverted 75 percent of the waste generated in 2010.

“We’ve made it easier,” said Supervisor Zach Friend, noting paper, plastic and glass go into one can for curbside pickup.

When contractors drop off demolition debris, “we recycle whatever we can,” said Kolassa, noting the landfill’s life “depends on how well we recycle.”

For Duran, the biggest challenge was December rain that shut down work until the site dried.

“Five inches of rain in one day,” said Spencer Wright, who supervised the project for Graniterock, which had 40 employees on the job site.

“It’s nice when you have a project this close to home,” said Wright, who lives in Santa Cruz.

For Kolassa, the next step is to find a location with 8 to 9 acres suitable for composting restaurant food waste, which is mandated by AB 1826. He would like to find a farmer willing to partner with the county.

Target date for that project is 2018.