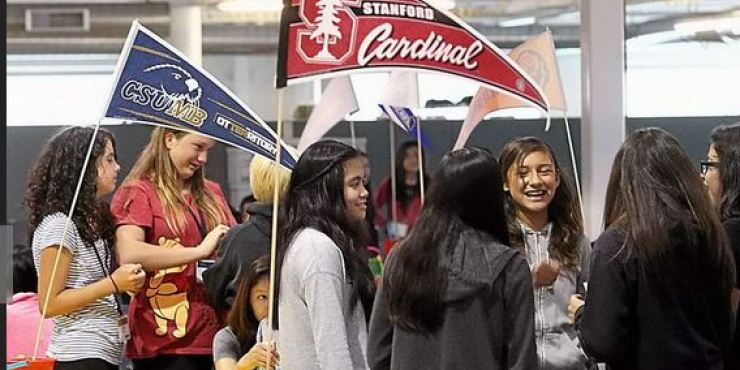 Bruce W. Woolpert Algebra Academy readies middle schoolers for this year and beyond

As San BenitoCounty’s seventh- and eighth-graders returned to their campuses recentlyfor the start of the new school year, nearly 50of them entered their math classes with a greater understanding of, and perhaps a greater appreciation for, algebra, thanks to the Bruce W. Woolpert Algebra Academyheld at Graniterock’s corporate headquarters in Watsonville earlier this month.

The Algebra Academy offers middle schoolers from San Benito,Santa Cruz andMonterey counties an opportunity to improve their “ability to understand, use and evaluate quantitative information”, while preparing them “for success in high school mathematics and readiness for college,” according to the organization’swebsite.

The academy is the brainchild of the late Bruce W. Woolpert, who served as Graniterock’s president from 1987 until his untimely death in 2012.

Described by his widow, Rose Ann, as a “math nerd,” Woolpert loved math and wanted a way to extend that passion to local youth, while exposing them to the boundless opportunities afforded by a college degree.

Searching for an educational partner in his endeavor, Woolpert reached out to Dr. Hongde Hu, professor of mathematics and statistics at California State University, Monterey Bay(CSUMB).

In 2007, Dr. Hu and his colleagues created an intensive algebra program for CSUMB’s incoming freshmen. The program was sorely needed, as over fifty-percent of all freshman attending a California State Universityare unprepared for the rigors of college math, according to the Legislative Analyst’s Office.

Dr. Hu’s program has been incredibly successful, and it’s one of the reasons why CSUMB’s math department was recently recognized as one of 14recipients of the first-ever California Awards for Innovation in Higher Education, a distinction created by the governor’s office that came with a $3 million prize.

With Dr. Hu’s support and expertise, Woolpert established his math academy in 2010, modeling it after CSUMB's’s intensive algebra program.

Dr. Hu and a middle school teacher from Rolling Hills in Watsonville began developing the academy’s curriculum. Since then, the academy has added the University of California, Santa Cruz as an educational partner, as well as enlisting the help of other local, middle school math teachers.

Writing by email,ShannaMcCord-Crigger, director of content forGraniterock, explained that thecurriculum is constantly evolving. She added that an effort has been made recently to align the curriculum with the Common Core Standards.

Before this year’s academy, students went to work on Aug. 6, they assembled around tables decorated with colored tablecloths and accentuated with college pennants standing at the tables’ centers. They listened as Sergio Rubio, a project manager for Graniterock, turned alchemist, melding real life with the world of mathematics—an act that often befuddles the adolescent mind.

At age four, Rubio left Mexico and arrived in the United States with his parents and younger sister. Life as an immigrant was difficult, he told the audience. Unable to speak English and too poor to afford brand name clothes, he was alienated from his peers at school.

Life at home offered no respite. Disillusioned by the pursuit of the American Dream, his parents succumbed to abusing alcohol, drugs, and then their children. Hard work, he explained, remained the one constant in his life—a quality he credited his parents with instilling.

When he was 11,Rubio got his first job sweeping a large warehouse. After high school he worked at a construction site, picking up debris and wondering why his foreman wasn’t covered in fifth. Concluding that education held the answer, he enrolled himself in Cabrillo College where he excelled at math, despite his low entrance exam. He persevered and eventually graduated from university.

Rubio left the 115 students with three final thoughts. “Seize the opportunity. Education is important, but always be thoughtful and generous. Grab life, because it’s yours,” he said.

After Rubio’s speech, the students were dismissed to sharpen their ability to focus and think analytically—the linchpin to increasing mathematical aptitude, according to Dr. Hu.

Half the group followed Dr. Hu upstairs, where he started the lesson with a question. “How many licenseplates in California?,” he asked. Several students shrugged their shoulders. He then explained that the California Department of Motor Vehicles uses a seven digit alphanumeric series when issuing plates. Numbers 0 thru 9 are used in the first, fifth, sixth and seventh positions, while letters A thru Z are used in the second, third, and fourth positions—a pattern similar to the sequence of 1ABC123.

Solving the problem, Hu added, involved the use of exponents and algebra. He guided students through the process, writing 10x10x10x10x26x26x26, before simplifying the expression, 104 x 263 =. With the $100 plus scientific calculator purchased by Wells Fargo Bank and given to them to keep, the academy students began computing. A student raised his hand when he had the answer. “175, 760, 000,” the boy said.

Dr. Hu nodded in agreement, but then asked why so many license plates were needed in the Golden State? Again, students shrugged. “38 million people live in California,” stated Hu. Students began making the connection. The state wasn’t in any immediate danger of swelling its congested roadways with unlicensed vehicles.

For the remainder of class, students worked collaboratively on additional problems, as Dr. Hu and his students from CSUMB provided guidance and encouragement. Assisting, too, was Hollister resident, Kevin Medeiros,who will teaching seventh and eighth grade math at Tres Pinos School, explained that he joined this year’s academy staff to get a better sense of the curriculum that he’ll be responsible for teaching his students. In addition, he added that he was excited to implement some of the lessons presented at the academy.

Dr. Ruben Zepeda, the superintendent of the Aromas-San Juan School District, paid a visit to Graniterock’s corporate headquarters that morning, observing Dr. Hu as he circulated among the students. This year, Dr. Zepeda’s district sent 18students to the academy, nine from both San Juan and Aromas Elementary schools.

Dr. Zepeda stated that beginning this year, “all ninth-graders” entering Anzar High School, the district’s only high school, “are taking geometry” instead of introductory algebra. The decision reflects a paradigm shift for the district.

At the middle school level, students will take math courses integrated with algebra, a course that often vexes high school freshmen, taking a toll on their grade-point average and self-esteem, according to Dr. Zepeda. After taking a year of geometry, students in need of additional algebra support will be enrolled in the Anzar’s Algebra I course, while those demonstrating proficiency will head into Algebra II.

Among those from the Aromas-San Juan district attending this year’s academy was Aromas eighth-grader, Joey (Jugari) Sahi. Of his experience, Sahi said, he would ranked it “an 8.5” out of 10. Learning new mathematical concepts and meeting new people were definitely among things he enjoyed, though he said that shortening the 1.5 hour classroom times could improve the program.

Sahi and others from Aromas will receive additional support during the academic year, meeting periodically with a math advisor during lunch time, according to an email sent by Bronson Lobue, the school’s principal.

Giannotta and her fellow academy participants were chosen by their math teachers, who then recommended their names to their principals. In the spring, selected students and their parents were invited to an informational meeting held at their school, where Algebra Academy representatives, including Rose Ann Woolpert, answered questions about the program. Prospective students then took a placement test to qualify for the academy.

McCord-Criggerwrote by email that “[a]lthough gender and race are not considered for admission, participants tend to be about half and half boys and girls and about 80 to 90 percent Latino.”

Forty-four students from San Benito Countyqualified for the program, which was held Aug. 5-7 and 10. In addition to the 18representing the Aromas-San Juan District, 20students (some of whom were seventh-graders) were drawn from Rancho San Justo, while six hailed from Tres Pinos School.

To fuel their brains with cognitive power, academy students were treated to snacks at break and sandwiches at lunch, courtesy of Driscoll’s of Watsonville. Building relationships will the community in support of his program was also something Woolpert strove to do.

As the attention spans of their pupils began waning in the afternoon, the academy staff ushered the students to the area where they assembled earlier in the day to listen to Rubio’s speech. Here, students prepared to have some fun—competing against each other in a game of Multiplication Bingo. Each student received a bingo card full of multiplication problems. Drawn from the bingo cage were numbers, solutions to the rows of problems on the card. As numbers were called out, students searched their cards, hoping to match four in a row.

The lessons learned and games played at Graniterock extended beyond the corporate office spaces converted into classrooms.

On Aug. 11, students took a trip to the campus of CSUMB, where the intricacies of algebra intersected with a core tenet of the academy—“provide students…opportunities to see and meet college faculty and campuses,” according to the academy’s website.

The next day a graduation ceremony for the Algebra Academy, students was held at E.A. HallMiddle School in Watsonville. It was the the culmination of hours spent in class, solving algebraic expressions and preparing for the future.

Joseph Circo, a ninth-grader at San Benito High School, participated in last year’s academy. He feels his experience gave him a leg up as an eighth-grader at Tres Pinos School, while preparing him for the rigors of high school math. “It prepared me really well for Algebra I, and will help me with terms and equations for this year’s geometry class,” he said recently.

Asked if he would consider applying to CSUMB, the campus he visited as a member of last year’s academy, Circo answered emphatically, “Yes, definitely.”

A response that the late Bruce W. Woolpert envisioned his graduates declaring when he established the Algebra Academy five years ago.

If interested in learning more about the Bruce W. Woolpert Algebra Academy, contact Rose Ann Woolpert at 831-768-2089 or [email protected]